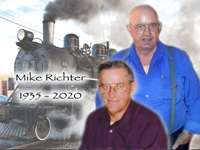 It is with sadness that the family of Michael Richter, beloved husband of the late Bernice Richter, announces his passing at St. Joseph’s Home – Carmel Hospice in Medicine Hat on Wednesday, November 4, 2020, at the age of 85 years. Michael was born on a farm near Fox Valley, the 12th of 15 children to Lawrence and Barbara Richter. At four years of age, the family moved to a farm northeast of Richmond and that was where he went to school for nine years. He spoke only German upon his first day of school, but he learned English fast as that was the only language allowed to be spoken in school. He would walk or ride by horse or carriage to school daily. Life was difficult on the farm and Michael learned at an early age how to pick rocks, feed the livestock and help with the farming. He left home when he was 16 years old and after a few short stints as a farm hand and general laborer, he found himself a job with the CPR , which as he put it, “he would do until something better came along”. His career lasted 37 years. He started out working on the gangs and worked his way up to Road Master for Medicine Hat. Michael met Bernice at a dance in Buffalo while stationed out there. He was at the dance with Bernice’s brother Arnold, when he got dragged up to dance by Bernice. They were married in Empress on November 15, 1957 and continued to dance together for over 60 years of marriage. They moved to Cluny with their older children, Sharron and Calvin and then to Bassano where they had the younger three children, Coreen, Darcy and Vicki. In 1970, they made their final move to Medicine Hat where he became the Assistant Road Master for a few years before becoming the Road Master. Michael could only be described as a character. He was always saying something different and he had a quirky sense of humor that could make most people laugh. He faithfully took Mom dancing with friends every Friday and Saturday to the Moose and then over to Humpty’s afterwards for some more antics. Michael retired at 55 and immediately started playing Slow Pitch in the Senior Men’s league. He pitched in the league for years. He also got involved in the German’s from Russia Society and found long lost relatives in Germany, which he visited twice. He organized a Richter Reunion and also wrote a book about the Richter Clan to celebrate what would have been his Dad’s 100 birthday. Michael took up carpentry and made numerous, beautiful cabinets, stools, pictures frames and so on. Michael and Bernice loved to camp. They were always glad when the kids would come along too. Michael and Bernice loved to travel. They went all over Canada, a large part of the United States, Germany, Hawaii and they even cruised the Panama Canal and made it up to the North Pole. He and Bernice moved into River Ridge in 2016 and this was where he spent the last four years of his life. He rarely missed a Bingo game or the days they had music and he continued to amuse the staff there until he became sick and passed away on November 4. Rest in peace Dad. We love you… Michael leaves to cherish his memory his children: Coreen (James) Sheardown and Vicki Fode; grandchildren, Carmen Worobets (Brent), Dean (Cindy) Richter, Kevin (Pascale) Richter, Brendon Fode, Christopher Sheardown and Shayla Fode; sister, Rose; daughter-in-law, Susan Richter; son-in-law, Don Taylor as well as numerous nieces and nephews. Michael was predeceased by his wife, Bernice; three children, Sharron, Calvin and Darcy as well as 13 siblings. Due to Covid restrictions, the Celebration of Michael’s life will be private for family. Those wishing to experience the Celebration are encouraged to visit www.cooksouthland.com and click the video stream button on the homepage at service time. The Celebration of Life will be held at Cook Southland Funeral Chapel on Saturday, November 7, 2020, at 11:00 a.m. with Dr. Shane Andrus officiating. Interment will follow at Hillside Cemetery. (Condolences may be expressed by visiting www.cooksouthland.com) Honoured to serve the family is