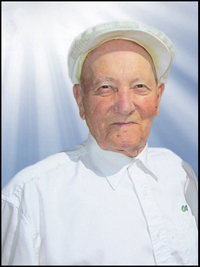 Mr. William Vinnish passed away in Medicine Hat on Wednesday, November 4, 2020, at the remarkable age of 100 years. Left to mourn Bill’s passing is his son, Lewis (Sandy) Vinnish; grandson, Trevor (Leanne) Vinnish and granddaughters, Tracey MacDonald and Tara (GW) Carlson all from Vancouver and Vancouver Island. He is also survived by his great-grandchildren, Lyberty, MacDonald, Ireland, Mattea and Quinn Carlson as well as Leneia Vinnish; one sister, Ester; two sisters-in-law; several nieces, nephews and their families as well as some very dear friends, Tom, Kim, Christian and Chris. Bill was born in Wakaw, Saskatchewan and raised on the family farm. After Bill married, they also farmed for several years before moving to Medicine Hat where he worked at Dominion Glass for the remainder of his working years. Bill enjoyed his retirement, working in his garden and caring for his apple trees. He also loved music, going to dances and playing his accordion. Going to the Veiner Centre and socializing were a big part of Bill’s life through his later years. He spent the last seven years at the Cypress View Foundation were he was loved and well cared for. Lewie and Sandy would like to thank all their staff as well as the Home Care Nurses and Care Aides who took such good care of Bill. God Bless you all.

Bill’s life will be honoured and his memory cherished without the proceedings of a formal funeral service. (Condolences may be expressed by visiting our website at www.cooksouthland.com) Honoured to serve the family is