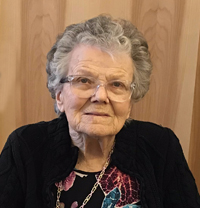 Hazel Agnes Cannon of Medicine Hat, AB passed away on November 13th, 2020 at 95 years of age. Hazel was born in Caron, SK on November 26th, 1924, the third child of Ivan and Edna Crosbie. She was predeceased by her husband, Harry; daughter, Joan Cannon; grandson, Brian Roflik; five of her siblings, Lena, Wilf, Aileen, Doris, and Valda; as well as numerous in-laws. Hazel is survived by her children, David (Diana) Cannon, Glenys (Wes) Richmond, and Linda (John) Roflik; grandchildren, Jordan (Jenaya), Stephen (Adriana), Ian (Maki), Sebastian (Jennifer), Dominic (Melanie) and Heather (Josh); great-grandchildren, Mateo, Caden, Olivia, Kendrix, Tohma, Felix, and Lara; brother, David Crosbie and sister-in-law, Bernice Crosbie; as well as numerous nieces and nephews. Hazel grew up on a farm at Caron, SK and received her teacher training at the Normal School in Moose Jaw, before going on to teach school in Tuxford and Shaunavon. She married Harry Cannon on July 19th, 1947 and they farmed and lived in the Marquis district. In 1964, they moved to Moose Jaw where Hazel taught school for many years in the separate school system. In 1978 Harry and Hazel sold their home in Moose Jaw and for the next 15 years lived in various locations including Buffalo Pound Lake, the Heron farm near Marquis and in Vernon, BC, eventually making their final move to Medicine Hat in 1993 to be closer to family. Over several years they enjoyed spending their winters golfing and relaxing in the sunshine of Mesa, AZ. Hazel especially enjoyed bowling, golfing, sewing, gardening, playing cards, and cooking family dinners and was a member of the C.W.L., ladies golf league, bowling league, bridge club, and new-comers group. The family is so grateful for the loving care that Hazel received at the Meadow Ridge Seniors Village during the final years of her life. Given the ongoing concerns with Covid-19, a modest ceremony will be conducted at the time of interment, limited to immediate family in the Medicine Hat area. Memorial gifts in Hazel’s memory may be made to the Alzheimer Society, 201, 770 – 6th Street SW, Medicine Hat, Alberta, T1A 4J6, Medicine Hat & District Food Bank, 532 S Railway St, Medicine Hat, AB T1A 2V6, or any Food Bank in your community. Condolences may be sent through www.saamis.com or to condolences@saamis.com subject heading Hazel Cannon. Funeral arrangements are entrusted to