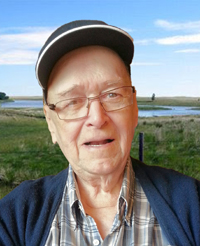 Brian Jones of Medicine Hat, husband of the late Mary Ellen Jones, passed away on Saturday, November 21st, 2020 at the age of 84 years. Brian leaves to cherish his memory his children Maureen Jones and Bruce Jones, grandchildren, Chris (Candace) Jones, Justin (Sarah) Jones and Tony (Gaby) Jones, great-grandchildren, Calico, Indigo, Jackson, Sadie, and Kennedy; sister, Jean Dahl; as well as numerous nieces and nephews. Brian was predeceased by his wife, Mary Ellen; parents, Meredith, and Elsie; brother, Gordon; and sisters, Margaret Paynter and Dorothy Sulz. Brian was born on June 13th, 1936 in Eatonia, SK. Growing up, he loved to play sports, especially hockey and baseball. In 1958, he married Mary Ellen Moran and together they raised their family. In 1964, they moved to Medicine Hat, AB. Brian continued to farm until 1979, when he became an owner/operator for Deluxe Central Taxi. He drove his taxi for the next 25 years and was well-liked by his co-drivers and customers; he was known for his great sense of humour. He was also an ardent farmer in both his home province and Alberta. He valued his community and was generous with everyone that he knew. Brian loved his family, was a wonderful husband and father, and was especially fond of his grandchildren and great-grandchildren. He will be deeply and fondly missed by all those who knew and loved him. There will be no formal service. Memorial gifts in Brian’s memory may be made to the Carmel Hospice at St. Joseph’s Home, 156 – 3rd Street NE, Medicine Hat, Alberta, T1A 5M1. Condolences may be sent through www.saamis.com or to condolences@saamis.com subject heading Brian Jones. Funeral arrangements are entrusted to