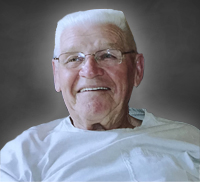 Our hearts are breaking but are peaceful at the same time. Rock Kilroe passed away on Friday, November 20, 2020 at the age of 94 years, to join his wife Ida. Rock passed with his son Tom at his side.

Robert Stephen Kilroe, Rock to most, was born August 30, 1926, in Vancouver, BC. When he was very young the family moved to Calgary, AB, where he grew up, married and raised his family. In 1942, Rock joined the Navy and served on various ships during WWII. An ankle he broke on board a ship, meant he was unable to play with the Cleveland Barons, a farm team, for the Chicago Black Hawks, the end of his NHL career. Rock went on to play Sr. Men’s hockey for the High River Flyers. In 1950, they won the right to represent Canada in the Winter Olympics, although a team from Edmonton was sent. Rock was an avid athlete playing football, and rugby; he won Provincial medals in handball and played semi-pro baseball. As he got older he became an avid curler. Rock joined the Calgary Fire Dept. in April of 1952, retiring in August of 1986, at the rank of District Chief. He was very proud that both his sons became Calgary Firefighters and when a grandson became part of the Medicine Hat Fire Dept. Windermere Lake was the summer home for many years, later becoming the full time home, with winters being spent in Arizona. While in Arizona, Rock took up silversmithing, lapidary work and found his passion in lathe work.

Due to COVID-19, a Private Family Service will be held on Thursday, December 03, 2020. A recording of the service will be available the following day on Rock’s obituary page. A Celebration of Rock and Ida’s lives will be held at a later date when the world returns to normal. Condolences, memories and photos may be shared and viewed on Rock’s obituary at www.McInnisandHolloway.com.