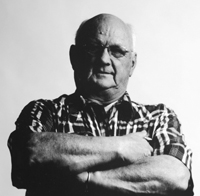 Edmond “Ed” Albert Lachapelle passed away peacefully in his home with family by his side in Medicine Hat on the morning of Friday, November 27, 2020, at the age of 85 years young.

To his friends and family, Ed was a rock. More than that, he was a boulder—a larger than life figure whose presence was always felt. Quick to lend a hand with genuine enthusiasm, Ed always put other people first, and you always knew what to expect from him. He was a soft-spoken man, but you listened when he spoke. Many were touched by Ed’s curiosity, affection, dedication, and his calming, gentle way. His loss is felt deeply by the many who love him.

Ed was born October 1, 1935, to Madeleine and Lucien Lachapelle in Milden, Saskatchewan. A hard-working farm boy, he grew up with a large Roman Catholic family. Immensely strong from an early age, he was responsible for regular chores on the family’s pig farm. At boarding school he earned his keep by cleaning the classrooms before and after school. Speaking French at home, Ed was bi-lingual and was soon put in charge of teaching his peers.

In 1950, Ed and his older brother Hector came home to find their house on fire. Alone, they saved what they could including the cast iron stove. Later, it took four men to move the stove. After the fire Ed and Hector quit school to help their dad, Lucien build a house for their family. They bought a farmhouse down the road and spent the summer dismantling it nail by nail. They moved the house bit-by-bit with a 3-ton truck and built the family home—better than before.

In 1960, while at home for a family gathering, Ed met Joyce Helgeson. The Lachapelle’s were (and still are) known for having barn-busters with music supplied by the family musicians. Ed had his leg in a cast and was put on bartender duty when he spotted Joyce from across the room. They danced the night away, and needless to say, the next day he showed up at the hospital where Joyce worked to have his cast re-set.

They were married on February 27, 1960. Their daughters Brenda and Beverly were born that summer, followed by their son, Jerry in 1961. Ed worked as a truck driver throughout Saskatchewan. In 1962, Ed was part of a 12-man crew testing a gas line in Edson, Alberta when it exploded. It remains one of the worst pipeline explosions in Canadian history, eight men were killed, and four survived. Ed was hospitalized and unable to work for months. His siblings pitched in to help and his younger brother, Arthur, came to live with Joyce and the three young children.

In 1966, the family moved to Medicine Hat where Ed worked for South Eastern Pipeline. They settled in the Riverside trailer courts while their children attended St. Patrick’s School. They made fast friends with their neighbours including the Hashiguchi and Plante families. Ed was an excellent host, always ready to offer a cold beer and his tasty BBQ ribs to anyone who walked through the door. In 1968, their youngest son, Richard “Ricky,” completed the family. Ed and Joyce purchased their first home on 12th Street NE in the early 70s—there they’ve lived for the last 50 years.

Never a man to sit on his hands, at 60 years old, he went into business with his son Jerry and started a second career with Plowline Contracting. Working alongside one another for many years, they operated D9 bulldozers to plow plastic and steel pipe in the ground all over Alberta and Saskatchewan. All his vehicles were always spotless and shined and he was particularly proud of his baby—a 2006 Kenworth tractor-trailer. Ed and Joyce found joy in being grandparents (and later great-grandparents) to their five grandchildren. They were active and engaged, always showing up, spoiling their grandchildren with the latest toys, and loving them unconditionally.

In 2002, Ed and Joyce purchased their dream motorhome, a 38-foot slice of heaven, and burgundy to boot! They spent the next decade driving coast to coast. Up to Alaska where they did in fact meet Santa Claus. With their family out of the house, Ed and Joyce’s companions during this time were their furry friends Brandy and Bailey. Ed’s evening ritual was practicing tricks with them. When pressed about retiring, Ed would say, “to me, retirement means getting new tires.” So, he kept on working up until 2019, where his last job at age 84, was running a grader on a pipeline in Lamont, Alberta.

For the last year of Ed’s life, he battled lung cancer. He slowed down a bit but was always up for playing dice around the kitchen table. He got a few motorhome trips in this summer. He hosted friends and family from near and far and impressed them with his new app-operated smoker. They had a birthday bash to celebrate his 85th with friends and family. And he and Joyce quietly, and joyfully, celebrated their 60th wedding anniversary this past February.

A memorial service will be held when the grass is green.