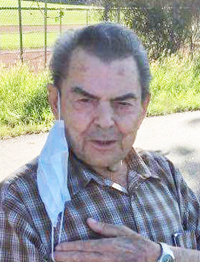 Ronald James “Ron” Cyr of Medicine Hat, beloved husband of the late Jennie Cyr, passed away on Monday, November 30th, 2020 at the age of 89 years. Ronald leaves to cherish his memory his daughters; Donna Dueck of Beaverlodge, AB, and Holly Cyr (Ken) Morrison of Edmonton, AB; and grandchildren, Koby, Kira, Rachael, and Quinn. Ronald was predeceased by his wife, Jennie; parents, John and Emilie Cyr; and daughter, Terry Van Der Kaaden. Ron was born in Brooks, AB, July 22nd, 1931, where he grew up and attended school. Following high school, he began working as a power linesman for Calgary Power and then for Sask Power. In 1959, he started his own business in Medicine Hat that provided well servicing and hot shot services. He also trained as an instrument technician and was able to utilize his skills to work in compressor stations. Ron retired from full time business in 1996, but continued to drive bus from Medicine Hat to the Suffield base for some time. During his leisure time, Ron enjoyed travelling throughout Canada, the United States, and Asia. He was especially fond of the time he was able to vacation in Japan, China and the Philippines. At home, Ron was an avid RC aircraft enthusiast. He particularly enjoyed planning and constructing his own model aircrafts as well as flying them. Ron was proud of his family and enjoyed spending time with them and he will be deeply missed. A private family Funeral Service will be held at SAAMIS MEMORIAL FUNERAL CHAPEL, 1 Dunmore Road SE Medicine Hat, AB T1A 1Z5, on Thursday, December 3rd, 2020 at 10:00 am with Gary W. Goran officiating. Interment will follow at Hillside Cemetery. Family and friends are invited to view the service by live streaming at www.saamis.com through the webcast link shown on Ronald Cyr’s obituary page. Streaming will begin at 9:55 a.m. Condolences may be sent through www.saamis.com or to condolences@saamis.com subject heading Ronald Cyr. Funeral arrangements are entrusted to