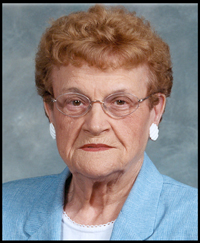 Theresa ‘Tessie’ Haubrich (nee Keck) of Medicine Hat, beloved wife of the late Lawrence Haubrich, passed away peacefully at South Country Village in Medicine Hat on Wednesday, December 2, 2020, having reached her 100th birthday on April 12th of this year. Theresa’s memory will be cherished by her children, Deanna Guidry, Garret (Liz), Bob, Murray (Emily), Randy (Delee), Warren (Geri), Karen (Jean) Marchand and Kathy (Ed) Crandell. She will also be missed by 21 grandchildren, 37 great- grandchildren and 13 great-great-grandchildren. Along with Lawrence, Theresa was predeceased by her parents, Agnes and Andrew Keck; sons-in-law, Ray Guidry and Ron Crandell; grandson, Lucas Crandell; sisters, Mary (John) Fink, Barbara (Frank) Goetz, Lena (Bill) Keller as well as her brother, Nick (Pauline) Keck. Tessie was born and raised on the Keck homestead at St. Elisabeth near Gravelbourg, SK. She married Lawrence on April 2, 1940 and they raised their family in Hodgeville, SK., retiring to Assiniboia in 1988. As an active lifetime member of the Catholic Women’s League and The Order of Royal Purple, she contributed to her community selflessly. Theresa was also a sports enthusiast. She was an avid curler and supporter of local hockey and baseball teams. She has resided in Medicine Hat since 2009. The family would like to extend a special thank you to the staff at Sunnyside Nursing Home in Medicine Hat for the exceptional care they provided to their mother, grandmother, great-grandmother and great-great-grandmother over the past six years. Due to the current Covid-19 restrictions, Theresa will be honoured through a celebration of her life in the spring with interment in Assiniboia, SK. (Condolences may be expressed by visiting our website at www.cooksouthland.com) Those wishing to remember Theresa may do so through a donation to the Alzheimer Society of Alberta, #201, 770 – 6 Street S.W., Medicine Hat, AB., T1A 4J6. Honoured to serve the family is

One Condolence for “THERESA HAUBRICH”