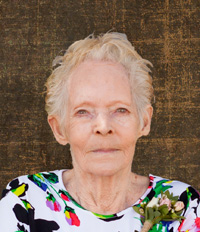 With heavy hearts, the family of Eva Elizabeth Ross, beloved wife of the late Lloyd Ross, passed away peacefully Sunday, December 6, 2020. Eva was born in Alsask, SK hospital on October 14, 1932, the youngest of seven children. When Mom was young she was very involved in the girls’ choir, softball and curling. After graduation she worked in the bank. She married Lloyd on November 14, 1953 and continued with softball and curling until they started their family, which then became her priority. Later they moved to the Little Plume area south of Dunmore, and then to Buffalo where they enjoyed many years with friends and neighbors, playing cards, guitar and impromptu sing alongs, until retiring to Medicine Hat. They continued to go “out home” to help with the work and to look after grandchildren. Eva is survived by her five children, Dale (Deb) Ross, Dean Ross, Marty (Lori) Ross, Kelly (Bonnie) Ross, and Lana Stadnicki; and her eleven grandchildren and eleven great grandchildren. She is also survived by one sister, Luella Eby; three sisters-in-law, Tillie Styles, Leona Styles, and Kay Benn; as well as numerous nieces and nephews. There will be no funeral service at this time. Memorial gifts in Eva’s name may be made to S.P.C.A. 55 Southview Drive SW, Medicine Hat, Alberta, T1A 8E8. Condolences may be sent to condolences@saamis.com subject heading Eva Ross. Funeral arrangements are entrusted to