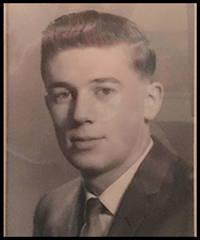 Norman Richard Hull of Redcliff, Alberta made his last inappropriate comment on December 13, 2020 at the age of 78. He never met a rule he couldn’t break, a line he couldn’t cross, a boundary he couldn’t push, or a story he couldn’t stretch. He told it like it is, and may have offended a few, but made a lot of true friends. The family would especially like to thank Nyles and Sue Lindsay, Doreen Ginham, and Brad and Trish Cummins for all their care and assistance. A special thank you to all the staff at St. Joseph’s Home -Covenant Health for the excellent care and compassion Norman received.

For the genealogists: Norm was born March 31, 1942 in Kamloops, B.C. to John Stewart and Bertha Elizabeth (Betty) Hull. After a brief stint in the Navy, he married Janet Stait and had two darling daughters, Cathy (Robert) and Karen (Barry). After trying many different occupations and having his knees replaced, Norm attended culinary school at BCIT where it turned out he could cook almost as well as his mother — and she was amazing. Looking for a chance to use his new skills, he moved to the big skies of Alberta and met and married the love of his life, Betty (Hubbard) Hull (who predeceased him in 1992). For many years, Norm worked as a civilian chef at CFB Suffield where he invented Normy Spice, which makes everything delicious.

Norm was a beloved brother to Margaret Anne (Ernie) McNaughton, Sharon (Mike) Blaney, Tom (Jacquie) Hull, and Gina (Gib) DeCap, grandfather to Jenny, Jamie, Jessica, Steven, Charlie and Andy, great granddad to Brandon, Keelan, Charlene, Deegan and Katie, and the fun uncle to many nieces and nephews. We will miss him and never forget the richer life of fun he thought of as normal.

Norm led a good life and had a peaceful death, but the transition was difficult. And for the record, he did not lose his battle with cancer. When he died, the cancer died, so technically it was a tie! He was ready to be with his beloved Betty and meet his Maker. We’re just not sure “The Maker” is ready to meet Norm.

As per Norm’s request there will be no service. In lieu of flowers, toast your loved ones and donate to your favourite cause. (Condolences may be expressed by visiting our website at www.cooksouthland.com) Honoured to serve the family is