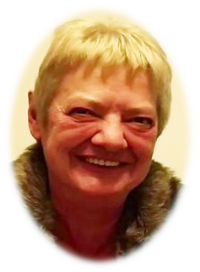 After a valiant battle with cancer, the family of Gayle Symmonds is heartbroken to announce her passing at the young age of 64 on December 16, 2020 at Carmel Hospice. Gayle was born in High River and lived in the Foothills area for many decades before moving to the Medicine Hat area to be close to her children. Gayle was predeceased by her husband, Henry and her mother, Isabel. She is survived by and leaves to cherish her memory her three children, Robert (Ashley), Sonja (Kris), and Tracy (Ryan), along with their families. She will be dearly missed by her sister, Lynda and sister-in-law, Mary Ann and several cousins, nieces, and nephews. Gayle lived for her grandchildren. Gayle had 14 grandchildren and one great grandchild. She was known as Nana Gayle to each of them and would do anything to make them smile and laugh. She was there to drive them to their events, play a board game, take them swimming, or do a goofy dance with them to be posted all over social media. No matter how outrageous their requests, it did not matter, as long as her grandchildren were happy. You could often find Gayle enjoying time with her two dogs, Molly and Billy, as well as spending time in her back yard. Gayle worked in many industries and was an entrepreneur, owning and operating her own restaurant for several years. Most recently, she found a passion working as a school bus driver where she thrived and genuinely enjoyed going to work each day. Our family would like to thank everyone at St. Joseph’s Home for the outstanding care and comfort given to Gayle and our family during these difficult times. A celebration of Gayle’s life will be held at a later time. In lieu of flowers, donations may be made in Gayle’s memory to AJ’s Loan Cupboard Bay 4-602A, Clay Ave SE, Medicine Hat, AB T1A 3K2 or St. Joseph’s Home – Carmel Hospice 156 3 St NE, Medicine Hat, AB T1A 5M1. Condolences may be sent to condolences@saamis.com subject heading Gayle Symmonds. Funeral arrangements by