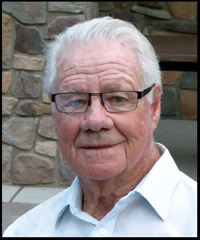 Ken Peterson, loving husband of 66 years to Alvina “Babe” Peterson, passed away from a sudden heart attack at his home, one day before his 89th birthday. An avid golfer, retired CPR locomotive engineer and member of the Medicine Hat Golf Club since 1954, Ken was part of the “Rat Pack” of retirees, playing 80-100 rounds each season. He was born in rural Saskatchewan, relocating with his family to Medicine Hat during WWII. He married Alvina Klukus in 1954, raised two sons, Kyle and Steven, and retired from the CPR in 1989. He enjoyed a long retirement, wintering among many friends in Arizona and golfing at home in the summer. Ken is survived by his wife, Alvina; son, Kyle (Terry) of Calgary; grandsons, Matt (Barb) Peterson of Medicine Hat and Keenan Peterson of Calgary; granddaughters, Regan (Aaron) Brooks of Lethbridge and Amanda (Mike) Nymark of Lacombe; great- grandchildren, Colton, Avery, Abby, Chloe, Colin, Aurora and Arianna as well as numerous nieces and nephews. Ken was predeceased by his son, Steven, in 1997; parents, Andrew and Rose Peterson; parents-in-law, Maggie and Otto Klukus; brothers, Arnold and Ron and sisters, Norma Lane and Isabel Schaurer. At Ken’s request, a private graveside service will be held where his ashes will be interred in his son’s grave. (Condolences may be expressed by visiting our website at www.cooksouthland.com) Donations in Ken’s memory may be made directly to the Salvation Army, 164 Stratton Way S.E., Medicine Hat, Alberta, T1B 3R3. Honoured to serve the family is

One Condolence for “KEN PETERSON”