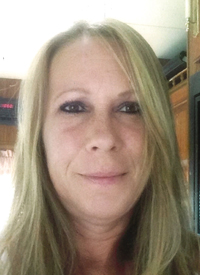 It is with great saddness that we announce the passing of Peggy Ann Carnegie, of Redcliff, AB, on Wednesday, January 6, 2021 at the age of 53 years. She leaves to cherish her memory her husband, Dale Carnegie of Redcliff; mother, Mary Meier of Redcliff; son, Alyx Ivanoff of Edmonton; daughters, Jewelz Mendryk and Danette Mendryk; granddaughters, Alayah Marshall, Ariella Potter; as well as numerous uncles, aunts, cousins, nieces and nephews. Peggy was predeceased by her father, Wayne Meier; brother, Brent Meier; Alyx’s father, Dickie Ivanoff and Jewelz and Danette’s father, Darrell Mendryk. Peggy was born and raised in Medicine Hat, she loved life, family gatherings, and her beloved pet “Chloe & the cat”. The funeral service will be held on Tuesday, January 12, 2021 at 11:00 a.m. at Saamis Memorial Funeral Chapel, 1 Dunmore Road SE, Medicine Hat, AB. Due to current Covid-19 restrictions the service will be by invitation only. Friends are invited to view the service by live streaming at www.saamis.com. Streaming will begin at 10:55 a.m. on the day of service. Memorial gifts in Peggy’s name may be made to Medicine Hat & District Food Bank Association 532 South Railway Street SE Medicine Hat, Alberta T1A 2V6 or Alberta Pound and Rescue Centre (APARC) 1002 South Railway Street SW Medicine Hat, AB, T1A 2W2. Condolences may be sent to condolences@saamis.com subject heading Peggy Carnegie. Funeral arrangements by