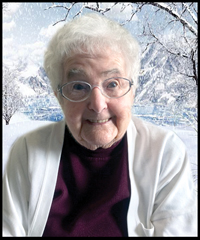 Audrey Peggy Peace Shirran passed away at Meadowlands Retirement Home in Medicine Hat on Friday, January 8, 2021, at the remarkable age of 100 years. She is survived by her daughter, Patricia (Andy) Roddick; grandson, Drew (Della); great-grandson, Grayson as well as her sister, Margaret Hannam of Dorchester, England. Audrey will also be remembered by her dear friends, Patti Ibach of Moose Jaw, SK., Michael Ibach of Brooks, AB., Anita Smith of Moose Jaw and her daughters, Stephanie and Sheena. She was predeceased by her husband, Alex Shirran; son, Roy Shirran as well as her parents, Ellen and Luther Perkins. Audrey was born on October 13, 1920, in Bury St. Edmunds, Suffolk, England and married a Canadian soldier named, Alex Shirran in February of 1941. She immigrated to Canada on the Britannic in May of 1945, with other war brides and their children landing at Pier 21 in Halifax. She settled in Rouleau, SK., before moving to Moose Jaw in 1954, where Alex worked at the post office. In 2016, she moved to Medicine Hat where she continued to reside until her passing. Audrey’s memory will be silently remembered by family and friends without the proceedings of a formal funeral service. (Condolences may be expressed by visiting our website at www.cooksouthland.com). Honoured to serve the family is