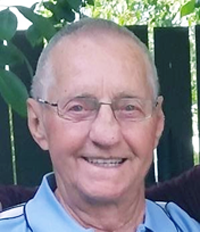 It is with great sadness we announce the passing of George Wendlin Hauck, beloved husband of the late Katherine “Kay” Hauck. George passed away peacefully at the Medicine Hat Regional Hospital on Friday, January 15, 2021, at the age of 88 years and was surrounded by his loving family. He will remain forever in the hearts of his five children, Denise Hauck, Anita (Cliff) Nagel, Robert (Brenda) Hauck, Darcy Hauck and Leslie Hauck; six grandchildren, Amy (Jay) Hauck, Kate Michalczyk, Clay (Madison) Nagel, Brayden Hauck, Kayla Hauck and Jared Hauck; two great-grandchildren, Coleton (Ashlee) Hauck and Paige Hauck; as well as three great-great- grandchildren, Nevaeh, Hudson, and Parker. George is survived by his two sisters, Marion (Felix) Lutz and Catherine (Bert) Besplug; as well as his sisters-in-law, Kay (Joe) Hauck and Josephine (Peter) Koch. He was predeceased by his beloved wife, Kay on July 25, 1979; his parents, Edward and Elizabeth Hauck; five brothers, Tony (Vera), Bill (Marie), Leonard (Millie), Joe (Kay) and Matt (Rose) Hauck; and one sister, Betty (Hank) Galecki; one brother-in-law, Paul (Martina) Schneider; three sisters-in-law, Anne (Tony) Wagner, Veronica Dirk and Anna Marie (Fred) Syroiszka. George also leaves numerous nieces and nephews to cherish his memory. A few comments from them are: “Uncle George was my favorite uncle”; “He had the most incredible laugh”, and “He is surely dancing in heaven now.” George was born August 25, 1932 on the family farm in Mendham, Sk. He married his love, Kay Schneider where they continued to farm and raise their family of 5 children. He was a full-time farmer and an incredible athlete – active in curling, baseball, hunting, and fishing to name a few. According to his sister Cathy, George was known far and wide for his running agility and speed. In her words: “That boy could move…” His sister Marion shares: “George, you were my #1 brother. You were always happy, happy, happy & always said I love you.” A personal excerpt from George’s children: Dad was an incredible athlete as evidenced by the numerous trophies on his mantle. As such, Dad was inducted into the Saskatchewan Hall of Fame in 2019 for his long-standing role in playing baseball for the Mendham Monarchs. He was so proud of this recognition. Camping was an annual family event, usually following a baseball tournament but was enjoyed by the whole family. With the passing of Kay in 1979, dad sold the farm and moved to Medicine Hat. He was an extremely talented bowler, pool player, loved golfing and spent countless hours with his grandchildren, either on the golf course or shooting pool. Nothing made dad more happy than being with his children and grandchildren. With all of his children settled in Medicine Hat, he was a very busy, very hands-on grandpa. He never forgot a birthday and attended every event the grandchildren were involved in, sometimes in quite a dilemma when events overlapped and he had to run from one to another, but he managed to always show his love for his grandkids in every possible way. Dad was never without Leslie by his side. Les lovingly took care of Dad and Dad took care of Les. As the youngest of the family, Leslie was with Dad the longest, right up to his passing. Dad was always saying how much he loved his boy – the last link to his precious late wife Kay. Most conversations with Dad always included how much he loved and appreciated Les: “Les takes such good care of me – What would I do without him?” Dad accomplished much in his life, but his greatest accomplishment was the legacy of love left behind through his five children and their families. (Love is patient and kind…Love bears all things, believes all things, hopes all things, endures all things. Love never ends – 1 Cor. 13:4-8) A celebration of life may be held at a later date. Condolences may be sent through www.saamis.com or to condolences@saamis.com subject heading George Hauck.