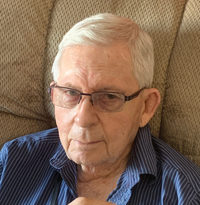 On an amazingly beautiful January afternoon Ken Boyd Quennell passed peacefully from his life here on earth joining Mom on their next journey together. Ken was born in Shaunavon, Saskatchewan on March 5, 1936. Like many he was born into a farming family and his younger years were spent working hard on the farm and attending school. He would get up and go light the fire to heat the schoolhouse in the early hours. In his 11th year he took a break from his education and assisted teaching at their country school. Upon completing his high school education Ken went on to further study in Moose Jaw, Saskatchewan completing the X-ray program and becoming a certified X-Ray technician on June 1, 1960. As a young man Ken met and dated Shirley Hardenne in Shaunavon Saskatchewan. Ken and Shirley were married in Moose Jaw on July 11, 1960 settling that year in Medicine Hat. Ken began his career at the Medical Arts Clinic eventually becoming manager of the Xray department. At the age of 47 years he returned to study taking ultrasonography at the Foothills Medical Centre. He became the first Diagnostic Medical Sonographer in Medicine Hat graduating with honours and attaining the Dr. H.E. Duggan Academic Award. He was proud of his 40 year career with the Medical Arts Clinic. Quiet, humble Ken was always respectful of his patients and staff. He greatly enjoyed conversation and coffee with his colleagues and respected the patient privacy in his care. In their pre-retirement he and Shirley enjoyed their travel with good friends returning many times to Hawaii. Once fully retired Ken and Shirley ventured around the world to places such as Europe, Panama, to the east and west coasts of Canada as well as Alaska. Ken was an active 3rd degree Knight of Columbus. He volunteered in every position and was involved in raising money for so many good causes throughout his years. He also volunteered for St. Patrick’s Parish as a cub leader, and eucharistic minister in his early years. In his later years Ken became involved with the building of today’s Holy Family Parish where he again volunteered his time on the board, as eucharistic minister and in other ministries at Holy Family. Ken loved to tinker and in his day Popular Mechanics and Popular Science were his reads. He self learned carpentry, plumbing, electrical and finished the basements in each house, and kept the cars tuned and running. Dad’s way of loving his family was to be able to help or fix something for his children. He was proud to hand down a legacy of hard work. Dad had a passion for genealogy and spent many years tracing back the family history for generations. Life really became enjoyable for Dad when his grandkids were born. The smile on his face when he would visit his toddler twin grandgirls bouncing in their cribs because they were so excited to see him. These now grown granddaughters followed after him with careers in ultrasound. Dad was a part of the everyday life of his grandson’s attending sports, school events or improv that they were involved in. Dad/Grandpa would have a sparkle in his eye when his great-grand daughter Ivy came to visit. Sadly due to Covid he was unable to meet his new great grandson Felix. Ken issurvived by his children Dale Quennell, Tara Schmidt, Deb Stiles(Ed) five grandchildren: Lindsay Schmidt (Nathan), Chelsea Nohr (Erik), Cody Schmidt (Heather), Jake and Kolby Stiles; great grandchildren Ivy and Felix Nohr; and brother Gary (Mary) Quennell. He was predeceased by his wife Shirley (Hardenne), brother Don Quennell, son-in-law Fred Schmidt and parents Anne and Gordon Quennell. May you find peace dad now free from the constraints of Parkinson’s and Anxiety. Godspeed to you xoxo We feel very blessed for the care Dad has received over the past few years. Most sincere gratitude goes out to all Staff at Chinook Village, Southlands Masterpiece and St Joseph’s Hospice Medicine Hat. A private family graveside service will take place at Hillside Cemetery at a later date. In lieu of flowers donations may be made to the St. Joseph’s Hospice Carmel Hospice (St. Joseph’s Home) c/o 156 – 3 St. NE, Medicine Hat, T1A 5M1. To e-mail an expression of sympathy, please direct it to: office@pattisonfuneralhome.com subject heading: Ken Quennell, or you may visit www.pattisonfuneralhome.com and leave a message of condolence.