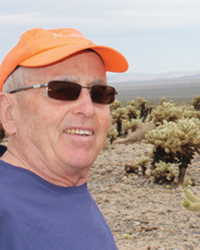 January 24, 1941 – Jul 4, 2020 James (Jim) passed away in Vancouver, B.C., on July 4, 2020, with his loving wife Bawne by his side. Besides Bawne, Jim is survived by his daughter Kathryn (Kevin and his daughters Lindsay, Ashley, and Heather and their families) and son Mark (John), who all miss him greatly. His sister Marilyn (Bill) and brother Don (Lee), and brothers and sisters-in-law James (Judi, since deceased), Dave (Cheryl), Daphne, Richard (Donna), Ken (Joanne) and Bill (Joanne) and their families also mourn his passing. Jim was predeceased by his parents, John (Jack) and Margaret, as well as his sister-in-law Linda and brother-in-law Bernie.

Born in Alberta in 1941, Jim grew up and had many fond memories of his formative years in Medicine Hat, including attending the World Scout Jamboree of 1957 in the UK. After graduation from the U. of Alberta (Calgary) in 1963 with a BSc, Jim spent his career primarily in the Oil & Gas industry, starting in Thompson, MB, with lengthy stops in Fort St. John, BC (where many wonderful friendships were made), Medicine Hat, and then eventually to Calgary, where he retired from Shell Canada in 2003.

What started as summer club swimming for his kids turned into Jim’s long association with amateur and Masters sports (swimming and cycling). Named as Medicine Hat’s 1981 Civic Recognition Award recipient for his dedication as Head Coach of AMAC (the swim team), many more years of involvement with Calgary’s swimming community followed. Post-retirement, Jim became involved with Masters Cycling (and made many more wonderful friendships) as a member of the Calgary Crankmaster Cycling Club. Upon moving to Vancouver in 2007, Jim continued his love of sports and volunteerism and was a very proud volunteer at the 2010 Olympics.

Over the years Jim enjoyed travel to Asia and Europe (including the epic 2009 bike trip to WWII historical sites in Northern France and a memorable trip with Kathryn to Prague in 1994), and most recently staying slightly closer to home with annual trips to the Coachella Valley.

A Celebration of Life will be held at a later date. Donations in Jim’s memory can be made to St. Paul’s Hospital (the family is extremely appreciative of the care he received while in hospital), the Heart and Stroke Foundation of Canada, or Qhubeka.org.