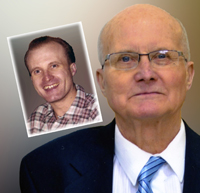 Ivor Thokle, of Saskatoon, the beloved husband of Orca, passed away on January 18, 2021, in Medicine Hat at the age of 91.

He is survived by his loving wife Orca, and sons Lenis Thokle (Natheal) of Calgary and Kevin Thokle (Tammy) of Medicine Hat. He will also be lovingly remembered by grandchildren Richard, Tamara, Jennifer, Tia, and Nathan, and great grandchildren Serenity and Nixon (with two more on the way). Also survived by his sisters, Elaine and Maureen, Orca’s brothers and sisters, their spouses, and numerous nephews and nieces.

Ivor was born and raised into a large and happy home on a farm near Radisson Saskatchewan, being the third youngest child of eight girls and four boys. Dad competed up to Grade 10 at the local bustling Waterbury community school, finishing his high school at Saskatoon Tech as it was not available at Waterbury. He went on to work for CP Rail’s bridge and building department for five years, which gave him access through his work and a railway pass to see this great country. He once visited with former Prime Minister John Diefenbaker on one of his train journeys. Wanting to travel less and settle down, he found work at Quaker Oats, then eventually retiring after several years working at Sherbrooke Nursing Home. Other ventures included, owning a bubble gum vending machine business, and earning diploma as an electronics technician and selling mutual funds. In October 1961, as Ivor put it, “his legs took him” to the Salvation Army church. Everyone was warm and friendly, therefore he kept returning and met his future wife Orca, who he married in April 1963. They lived in the same house for over 50 years with a fabulous yard and garden, then moving to a condo in Saskatoon then more recently to Medicine Hat to be closer to family.

Dad was a devoted husband and father who loved taking his family summer vacations, camping, fishing, Disneyland, Vancouver Island, etc. He was especially proud of a six-week cross Canada trip to the Maritime Provinces, and a trip to our ancestral home of Norway with his family. There were also many treasured local trips with his children and grand children to pike lake, beaver creek, Kinsmen Park, zoo, etc, and even to the “hill” in the park behind the house. He always saw the beauty of Saskatchewan from the prairies in the south to the lakes of the north.

Ivor had many interests in areas relating to his faith, nature, and conservation. He almost always could identify birds by sight or song and loved identifying plants. He was a member in numerous nature clubs, Norwegian culture society, Akela in the scouting movement, and many volunteer roles in the Salvation Army throughout his years. He was a kind, gentle, most honest, charitable, and understanding man. His unprejudiced integrity in giving back with his caring style of leadership, mentoring, and guidance truly left a mark on those many lives he touched.

A celebration of Ivor’s life will be held at a later date at the Saskatoon Salvation Army Temple. To express condolences and share memories, please visit: www.mountainviewmemorial.ca.