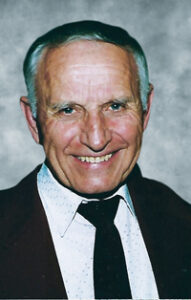 Albert M. Sowinski passed away early Thursday morning, January 28, 2021 at the age of 88 at Mayfair Care Centre in Calgary after a long battle with PSP Parkinson’s disease.

Albert was born on July 22, 1932 in Fox Valley, Saskatchewan, the third of four children to John and Tekla Sowinski. He grew up on the family farm just outside of Fox Valley.

Albert started employment with the Canadian Pacific Railway in 1953 and continued his career with the railroad until retirement in January 1996.

He lent a helping hand to many young employees starting out with the CPR. Many of whom turned into life long friends.

During those years Albert enjoyed taking theology classes, travel to various provinces and countries and visiting with friends and family. He had many pen pals all over the world and enjoyed continued correspondence with them until he could no longer type on his typewriter.

Albert worked with the church community of St. Lawrence Catholic church and was a member of the Knights of Columbus both in Maple Creek, Saskatchewan.

He was very supportive of family living in Poland and the Ukraine, helping them to live better lives.

Albert loved working with the Calgary Telegraph Club. He volunteered at Heritage Park during the summer months talking about and demonstrating the use of different types of telegraph machines.

He also loved photography. Through the years, Albert could be found with his still camera, movie camera and/or video camera at all family and friends occasions recording the events of the day or days.

Albert also enjoyed the Friday morning coffee club at a local A&W restaurant with fellow retirees of the CPR.

He was always willing to help those who needed assistance driving to appointments or church, yard work, snow shovelling or whatever or whenever the need arose.

A very generous and selfless person who lived a very selfless life.

Albert is survived by his sister, Margaret Jackle, nephews Dr. Chad Jackle (Angel) and Randy Jackle, nieces Patricia Cimmeck (Dietrich) and Michele Bennett (Calvin) and many great nieces and nephews. He was predeceased by brother John in 1954, mother Tekla in 1972, nephew Bradford in 1982, father John in 2000 and brother Stephen in 2018.

In lieu of flowers, donations may be made to www.curepsp.org or www.parkinson.ca

Condolences may be offered to the family at www.binkleysfuneralservice.com

One Condolence for “SOWINSKI”