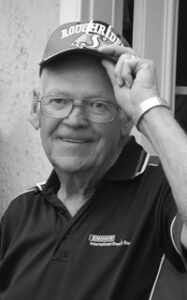 Wayne McNamara, beloved husband of 64 years (so close to 65), of Jean, peacefully passed away Tuesday February 16, 2021.

Wayne is survived by his wife Jean of 64 years and 6 beautiful children, 11 Grandchildren and 13 Great Grandchildren.

Wayne was predeceased by his brother Clifford and one Grandson David.

Wayne had an amazing life, born in Rockglen Saskatchewan and grew up in Kincaid, where he started his work life as a Mercantile Man shortly after getting married. The next career move was to Moose Jaw to become a Surveyor. Finally, Wayne found his true work calling in flooring, starting in Regina at Craklin Carpet where he became a wholesale representative for Kennidy’s. This set him up for his move to Lethbridge to become the Head Sales Manager at Revelstoke. In 1993, Wayne and family, moved to Medicine Hat, to assist two of his sons, Jerry and Kevin, to establish Creative Floor Coverings. In 2000, Wayne retired and returned to Lethbridge. Wayne then was instrumental in assisting two more sons, Trevor and Mickey, to establish their own flooring business, McNamara Carpet Gallery, which they later sold but then opened Flooring Superstore 5 years later.

Wayne has created a great legacy in the Family Flooring Business, which included all. They each had their own niche from Mom (Jean) gluing down carpet, the four boys (Jerry, Mickey, Kevin and Trevor) owning their businesses, Pam and Daylene assisting with installs. Wayne was immensely proud of this legacy he unknowingly was creating and continues as there are already four grandchildren in the flooring business, which Wayne has encouraged them to do and they are all very successful.

Wayne didn’t take retirement laying down. He had so many passions but making people happy had to top the list. He spent hours perfecting his homemade bread, which he would use for horse trading for goods at the Farmers Market and for getting favors/chores done at home . Wayne would make up to 14 loaves of his delicious bread per week. He also did this with his famous homemade jams. Wayne also was extremely passionate about his garden and yard. Each spring he would start over 70 tomato plants, which he took so much pride in. This gave him his nickname of “Tomato Man” which he wore as a badge of honor. Twice a week, you couldn’t stop him if you tried, Wayne would go and play in a crib tournament with a great group of friends, no matter the weather. In the summer, you could find Wayne at 40 Mile camping and socializing. He literally seemed to know everyone.

A special Thank You to Doctor Dalphond, for her amazing care she gave to Wayne. Doctor Low for his treatment and care of Wayne’s heart. The pharmacists at both Costco and Norbridge, for all the time and compassion for Wayne. Thank you.

Wayne’s Love For Life and People was infectious, he was never scared to talk to anyone or give a hug and a kiss.

Thank you for all the love and support via Facebook and phone calls. He would LOVE that! Due to Covid restrictions, there will be a celebration of life to be announced later.

In lieu of flowers, please make a donation to a charity of your choice (heart and stroke, animal shelter, etc…) or plant a tomato plant in honor of Wayne McNamara.

One Condolence for “WAYNE MCNAMARA”