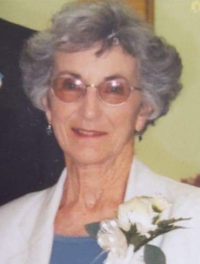 Elinor Elizabeth Robertson (nee Rowley), beloved wife of the late David Robertson, passed away peacefully in Bow Island on the morning of Saturday, February 20, 2021 at the age of 91 years.

As a result of current regulations regarding COVID-19, a memorial service will be held at a future date. Condolences may be forwarded by visiting our website at www.southlandfuneral.com.

Family, immediate and extended, was Elinor’s primary focus and passion. She also loved music, and she shared this gift with the community, especially St. Andrew’s United Church. Volunteerism filled Elinor’s life and heart with joy and purpose. She was actively involved with many church committees and groups, as well as community endeavors, which included the many clubs and groups with which her children were involved. The hospital auxiliary, especially palliative care, the Bow Island Tourism Board, and St. Andrew’s United Church music programs were several, of the many, that were dear to heart. As a lifetime caregiver, Elinor’s life motto was “have an attitude of positivity and the good days will outnumber the down ones.”

One Condolence for “ELINOR ROBERTSON”