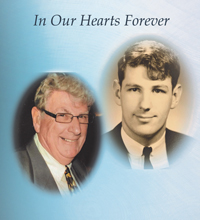 Fred was born in Medicine Hat in 1944 and graduated from Medicine Hat High School. In 1963 he headed to Oregon where he completed a Master’s Degree in Social Science and taught education psychology at the University of Oregon. He then spent several years teaching at the Oregon Episcopal School in Portland. His students still contacted him and the many calls, video chats, emails and texts over the past months were of great comfort to him.

Fred moved back to Canada and taught in Golden British Columbia, and in 1979 became Assistant Director of Government Affairs and Professional Development with the BC Teachers Federation.

In 1981 Fred joined the mediation branch of the BC Ministry of Labour where he specialized in education sector mediation.

In 1993 Fred took on the role of Chief Executive Officer of the Education and College Relations Commission in Ontario, and then as Director of Human Resources for the Education Improvement Commission for the Government of Ontario. That is where he met his wife Beth, who was working as an Education Officer for the Commission.

In 2011 Fred and Beth moved back to enjoy their retirement in Medicine Hat. Fred was an avid traveller, golfer and a good and loyal friend to those who knew him.

A memorial celebration of life will be held for Fred at a safe time in the future at the Connaught Golf Club.