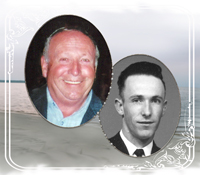 Pius Gaetz, beloved husband of 57 years to Frances Gaetz, passed away on Monday April 5, 2021. He had celebrated his 80th birthday on February 9, 2021 in the Medicine Hat Regional Hospital. Pius will be lovingly remembered by his children, Chris (Claudine) Gaetz, Mark Gaetz and Tracy (Gordon) Reid; grandchildren, Brittany Gaetz (Keagan Barker), Sean Gaetz (Alissa Fitzsimmons), Stephanie Gaetz (Derek Friesen), Tradon Reid (Kylie Sakino), Kasandra Reid, Anthony Gaetz (Devon Carlson); brothers, Ray (Gladys) Gaetz, Leo (Johanne) Gaetz and Jim (Rachel) Gaetz; sisters, Kay Bowes and Shirley (Howard) Sharpe; brothers-in-law, Frank Besplug, Tony (Rose) Lanz, Johnny (Phyllis) Lanz, Eddie (Geri) Lanz, and Kathy (Russ Peterson); sisters-in-law, Anne Gaetz, Ruth Gaetz, Penny Gaetz, Rose Lanz, Irene Lanz, Joan Lanz, Penny Lanz, and Mary Bitz. The rest of the family, nieces, nephews, and their children will always remember Uncle Pius as the light and life of the party. Pius was predeceased by his parents, Christian and Mary Gaetz; in-laws, Erasmus and Katherine Lanz; grandson, baby Andrew; brothers, Martin Gaetz, Robert Gaetz and Joe Gaetz; sisters, Rosemary Besplug and Sister Bernadette “Theresa” Gaetz; daughter-in-law, Jackie Gaetz; and brothers and sisters-in-law, Veronica (Tim) Sehn; Basil Bowes, Maggie (Mel) Hasper, Frank Lanz, Balzar Lanz, Leo Lanz, Ben Lanz and Jerry Bitz. Pius was born and raised in Medicine Hat and lived here for most of his life except for a brief move to Hanna, Alberta. He was a Journeyman Plumber and Gas fitter, owning his own company, Pius’s Plumbing, as well as working for other companies throughout his career. There was nothing that Pius could not accomplish when he set his mind to it. He built two houses from top to bottom for his family, with very minimal help and so much love. Pius’s love for music had him learning how to play the banjo on his own, then playing with his band members in Medicine Hat and surrounding areas. Everywhere that Pius went, his jokes and laughter followed him. He loved camping in Elkwater overflow with all Frances’ family in one big circle. A high point of their travel was to go to wherever Tracy and Gordon were living to spend time with them and their children. One of their favorite destinations with them was Disneyland. Frances and Pius were also able to travel to various destinations with family and friends. In later years, the trailer made its way to Rattlesnake Park, where golf carts and banjo playing had a whole new meaning. Pius was extremely proud of his grandchildren and was very ecstatic to find out that he had a great grandchild on the way this year. His love for family will be continued on through his children and grandchildren. The family would like to extend our thanks to the staff from 2 North at the Hospital who took outstanding care of Pius. Those wishing to pay their respects may do so at SAAMIS MEMORIAL FUNERAL CHAPEL, 1 Dunmore Road SE, Medicine Hat, AB T1A 1Z5, on Friday, April 9th, 2021 from 7:00 pm to 9:00 pm. Due to current Coviid-19 regulations a private Funeral Mass will be held at St. Patrick’s Roman Catholic Church, 238 – 2nd Avenue NE, MEDICINE HAT, AB T1A 5Z9, on Saturday, April 10th, 2021 with Father Roque Pereira, Celebrant. Attendance is by invitation only. Family and friends are welcome to participate via livestream by logging on to www.saamis.com and joining the live webcast on Pius’s memorial page. The interment will follow at Hillside Cemetery. Memorial gifts in Pius’s memory may be made to the Alberta Heart & Stroke Foundation, 200, 119 – 14th Street NW, Calgary, AB T1A 7L5. Condolences may be sent through www.saamis.com or to condolences@saamis.com subject heading Pius Gaetz. Funeral arrangements are entrusted to