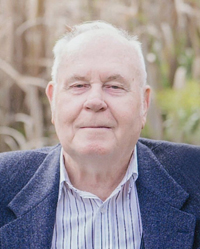 Melvin C. Roth, the son of William and Mary Roth of Medicine Hat, died peacefully on April 5, 2021 at 90 years old. A long time resident of the Medicine Hat area he was raised in Saskatchewan, Canada, near Fox Valley where his Romanian-German parents and grandparents settled after the turn of the 20th century.

He was devoted to providing for his family, his loving wife June (Howitt), and his children. He worked at the Redcliff Glass Factory, as a machinist apprenticing through the Southern Alberta Institute of Technology, at the Western Co-op Fertilizer plant, and later in life as a realtor.

But his real passion was the outdoors, nature, and country life on their farms raising hay crops, livestock, and many horses, like his father before him. He planted and nurtured hundreds if not thousands of trees on the land he cared for, inheriting his very green thumb from his mother, Mary.

No one who met Melvin forgot his sense of humor, and most were left laughing after spending a few moments with him. He loved a good joke and had many dear friends. After retirement he would entertain his friends and acquaintances at talent shows, playing music, and performing amateur comedy routines.

He volunteered at and supported his church, St. Paul’s Lutheran, and Boy Scouts of Canada. He enjoyed being a summer campground host at The Boat Club and he fished, hunted, and hiked with his friends, children and grandchildren until he was well into his 80s.

Because of the Covid-19 pandemic a private family memorial will be held at a later date.

Memorial gifts in Mel’s memory may be made to your charity of choice. Condolences may be sent through www.saamis.com or to condolences@saamis.com subject heading Melvin Roth. Funeral arrangements are entrusted to

One Condolence for “MELVIN CLIFFORD ROTH”