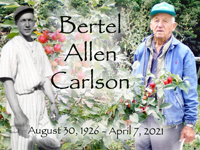 Bertel Allen Carlson, beloved husband of the late Wilma Carlson, passed away at the Medicine Hat Regional Hospital on Wednesday, April 7, 2021, at the age of 94 years. Bertel’s memory will be forever cherished by his daughter, Debbie (Kevin) Harrison; daughter-in-law, Glenna Carlson; grandchildren, Chad (Krista) Carlson and their daughter, Kinley; Jordan (Kim) Carlson and their children, Sydney and Cole; Joel Carlson and his children, Jackson, Hailey and Gavon; Kevin’s daughters, Daphne Shackleton and her children, Allysa and Mikayla; Courtney (Eddie) Padilla and their children, Kyra and Daxon; sister-in-law, Lillian (Don) Leathwood; brother-in-law, Harold Anderson as well as numerous nieces, nephews and cousins. Along with his beloved wife, Wilma, Bertel was predeceased by his sons, Reg, Larry and Phylip; parents, Gustav and Johannah as well as his siblings, Carl, Agnus, Gilbert, Edith, Linnea and Glayds. Bertel was born in Medicine Hat and raised on a farm south of Seven Persons. He married Wilma Denise Anderson on February 6, 1951. Bertel not only enjoyed watching baseball, he loved playing baseball and had a chance to play professionally but wouldn’t leave the homestead as family was all too important to him. Hunting was also a great past time to Bertel, both big game and birds. His favorite dog was a black lab named, Laddie that loved to go hunting with him. Dancing, bowling, collecting rocks, working, socializing with his many friends, farming and ranching were all interests of Bertel’s. Over the years, he participated in numerous service groups including the Junior Forest Wardens and provided handicapped riding to those less fortunate. Bertel spent a lot of time with the grandchildren when they were little and loved entertaining them and teaching about things he enjoyed, from playing the accordion, baseball, riding horses, and milking cows… everything to do with farm life and being self sufficient. He said, “any damn fool can hire it done”. The one thing he was happiest about was the number of friends he had. He will be missed by many great friends. Bertel was affectionately known as ‘the popcorn man’ at the farmer’s market and ‘Mr. Farmer’ when he gave school tours at his petting farm. He was a kind, gentle and hard working man who was always cheerful, welcoming and had a great laugh. One of Bertel’s most memorable occasions was his 80th birthday, where it was celebrated with three days of dancing at the Seven Persons Hall. He was thankful that he had so many friends over the years that brought him countless moments of joy. Bertel didn’t know when hugging became popular, but he sure liked it. He will be fondly missed! Bertel’s memory will be cherished and his life honoured without the proceedings of a formal funeral service. A private family interment at Red Rock Cemetery at a later date. In honour of Bertel, the family requests that you do something nice for someone. (Condolences may be expressed by visiting our website at www.cooksouthland.com) Honoured to serve the family is