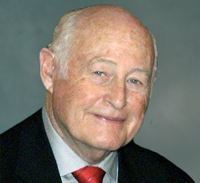 It is with great sadness that the family announce that Bill Klasky of Calgary, AB, passed away very peacefully at home on Tuesday, March 30, 2021 at the age of 86 years.

Bill was born and raised in Medicine Hat, AB and spent his early years working in the Western Wear industry. He successfully developed sales for Great Western Garment Company Ltd. (GWG) across Canada while living in Calgary, Regina and Dundas, ON. Upon returning to Calgary in 1974, Bill and Gail decided to enter the insurance industry in 1978 by starting their own brokerage, KDM Sterling Consultants, known to their many loyal clients as Sterling Insurance located in the Bonavista Shopping Centre for over thirty years. Bill and Gail were able to enjoy the fruits of their labors by retiring early after the sale of their companies.

Throughout his life, Bill was a tireless community volunteer and actively involved in many service organizations wherever he was. Bill was initially a continually active member in Kiwanis and Freemasonry and became a member of the Masonic Lodge (NWMP #11) in 1962 in Regina where his work ethic and positive attitude helped him become a 32nd Degree Master Mason which allowed him to become a member of the Shriners, which he was so proud of.

The list is almost endless of the organizations and communities that Bill supported with his valuable time. Bill was a life member of the Calgary Stampede where he volunteered with the Promotion, Park Parade, and International Committees. Bill was active politically and his experience was often called upon by the Alberta government with requests to sit on various boards and committees including the Society of Radiologists, AHS Citizen Advisory Committee and the Calgary Police Commission. In later years, Bill offered his voice for audio books and news reading for the visually impaired while being continually active with the Calgary Airport White Hat program, greeting visitors to the city that Bill called home.

Bill’s years of fishing with his dad created an adventurous spirit that Bill exercised throughout his life. While Bill and Gail enjoyed spending a quarter of their year in Solana Beach in California, they still made time to cruise to literally every corner of the world, enjoying the experience whether it was going up the Amazon in a small sailing ship or a luxury cruise to Monte Carlo. Bill continued to share the joy of cruising and seeing the world after the passing of Gail with Pauline, and they were able to complete his last bucket list trip to Tahiti, Fiji and Australia returning in Mid March of 2020, just minutes before ports were closing behind him.

Bill enjoyed everything life had to offer and embraced it with great enthusiasm, a sense of humour, a giving soul, gentle kindness and great love and respect for those of us he shared his life with. He will be deeply missed by his family and friends who knew and loved him.

Bill was predeceased by his loving wife of sixty-one years, Gail, in 2015.

A Celebration of Bill’s Life will be held when the world allows for all of us to have a fitting celebration to remember and reminisce about this incredibly special man.

Condolences, memories, and photos may be shared and viewed on Bill’s obituary at www.McInnisandHolloway.com.