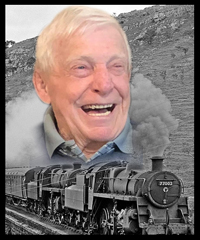 John Jangula, beloved husband of the late Ronalta (Ronny) Jangula, passed away at the Medicine Hat Regional Hospital on December 31, 2020, at the age of 90 years. John was born on April 14, 1930 in Mendham, Saskatchewan. He was one of 20 children born to Philip and Elizabeth Jangula. He attended country school near Mendham before moving to Medicine Hat at the age of 15. On May 21, 1957, he married Ronny Byers in Medicine Hat and they were married for 61 years before her passing in 2018. John started working for CP Rail in 1948 and became a Locomotive Engineer. He was a dedicated and loyal employee for 39 years until his retirement in 1987. John was active and enjoyed golf, curling and played senior baseball. Following his retirement, he and Ronny enjoyed 15 years of traveling and spending their winters down south in the Palm Springs / Indio area of California. John will be lovingly remembered by his daughters, Alison (Bob) Wonnenberg and Terrie (Don) Conte, son, Neil Jangula (Donna Mayer); 9 grandchildren and 20 great-grandchildren; a sister, Ann Baier as well as numerous nieces and nephews. He was predeceased by his wife, Ronny; grandson, Michael Wonnenberg; great-granddaughter, Lucia Conte; his parents and numerous brothers and sisters. A private Graveside Service will be held at Hillside Cemetery on Saturday, April 17, 2021. (Condolences may be expressed by visiting our website at www.cooksouthland.com) The family extend their appreciation for the love and support shown since John’s passing and to the TCRC Division 322 for their donation to the CP Pensioners Club in John’s name. Honoured to serve the family is