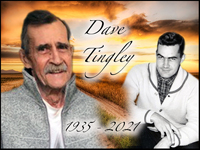 It is with deep sorrow that the family of Charles David Tingley ‘Dave’ announces his peaceful passing after a short illness on Monday. April 19, 2021. Dave was a proud life-long resident of Medicine Hat. He graduated from Alexandra High School in 1955. He began his career at North West Nitro Chemicals (later Western Cooperative Fertilizers) in 1956 where he worked as the laboratory supervisor until he retired in 1999. Dave worked hard and his family never wanted for anything. He was quite the athlete as he played semi-professional baseball (catcher) with the Medicine Hat Orphans, who won the pennant and league championship in 1958. His best catch of all was Ardis Wuerfel, whom he married on April 7, 1959. They enjoyed 62 happy years together. Dave also enjoyed golfing, fishing, waterfowl hunting, fossil-hunting and camping. During the winter, he excelled at curling and won many bonspiels. He was an amateur paleontologist and spent many happy hours wandering the badlands in search of dinosaur fossils. His restoration of a mammoth tusk was displayed at the Medicine Hat Museum. In his spare time Dave enjoyed woodworking. He was a proficient craftsman and remodelled the family home, room by room. The family are all fortunate to have several pieces of his hand-made furniture that they will treasure forever. His daughters and grandchildren feel lucky that he spent so much time sharing his enthusiasm for his hobbies. Unfortunately, they are not quite as adept as he was! Dave is survived and will be lovingly remembered by his wife, Ardis; daughters, Moira Gallagher (Mark) and Sharon Tingley (Courtney Tripp); grandchildren, Laura Gallagher, Sheila Gallagher (Trevor), Aaron Beaton and Jay Beaton; step-grandchildren, Laurier, Suzanne and Samuel Tripp; sister, Madeleine Oliphant as well as numerous nieces and nephews. Dave was predeceased by his parents, Herman and Mary Jane and his siblings, Jean, Mary, Betty, Doreen and Raymond. In accordance with Dave’s wishes, cremation has taken place. A service will be held during the summer respecting Covid regulations in effect at the time. Should friends so desire, donations can be made in Dave’s memory to the Salvation Army, 164 Stratton Way S.E., Medicine Hat, Alberta, T1B 3R3 or to a charity of one’s choice. ‘So long, Dave!’ (Condolences may be expressed by visiting our website at www.cooksouthland.com) Honoured to serve the family is