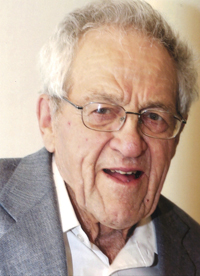 Edward “Eddie” Herrmann was born June 1, 1936 in Medicine Hat, Alberta to John and Emma Herrmann. Raised on the family farm near Schuler, Ed took his early education at Friedensfeld School, travelling to school by horse and buggy with his brothers and sisters. Ed loved life on the farm and his sister Annie would often find young Ed playing in the grain bins in the wheat or using old bones as trucks. Farming alongside his parents and siblings Ed found his passion. He continued farming with his father, eventually taking over the family farm after his dads passing in 1959. In March of 1969, Ed decided to join his best friend Roger and Roger’s girlfriend, Ruby in picking up Ruby’s sister, Darlene from the train station. Upon meeting, Ed made a date with Darlene for the next day. Ed married Darlene Elsasser on October 10, 1970 at Grace Baptist Church. They resided on the family farm, building their own home and raising their family. Ed leaves to cherish his memory his wife, Darlene; daughter, Elaine (Stuart); sons, Blaine (Elly) and Scott (Amanda); grandchildren, Shannon (Ryley) Miller, Reid Wilkie, Emma Herrmann, Annie Herrmann, Luke Herrmann, Elizabeth Herrmann; great granddaughter, Paisley Miller; brother, Albert (Elma) Herrmann; sisters, Ella Van Maarion, Eva (David) Knock and Bernice Gyorkos; sister-in-law, Pat Herrmann; brother-in-law, Roger Ancion. He is predeceased by his parents, John and Emma Herrmann; brothers, Victor, Clarence, Alfred and Denny; and sister, Annie (Gilbert) Becker. Ed’s love of the farm was strong and he was a long standing member of the Drowning Ford Grazing Association. He was a hard worker, spending many long hours outside doing what needed to be done; fixing miles of fence, picking rocks or tending to his Herefords. Ed loved animals, particularly his horse, Princess, who he raised from birth. Achieving a century farm in 2012, Ed fully retired handing the reigns to his sons.

Ed found so much joy in his grandchildren. He would always be found down on the floor stacking dominos or playing crazy eights and would always say yes to their requests for trips to the park or for ice cream. Ed was an expert at putting his grand-babies down for a nap as he always joined them; they had the best sleeps with Grandpa Ed on his recliner. So dedicated, Ed even received a volunteer award from Shannon’s school for supervising field trips riding the bus. Ed leaves a wonderful and lasting legacy to his children, grandchildren and great grandchild. He will be greatly missed by all those who knew and loved him. The family is grateful to the staff at Masterpiece for the loving and caring environment they provided to Ed. There will be public viewing on Sunday, April 25, 2021 from 6:00 – 8:00 p.m. at SAAMIS MEMORIAL FUNERAL CHAPEL , 1 Dunmore Road SE, Medicine Hat, AB. A private Graveside Service will be held at Hillside Cemetery on Monday, April 26th, 2021 with Pastor Bob Findley officiating. Friends are invited to view the service by live streaming at www.saamis.com on Ed’s memorial page. Streaming will begin at 3:25 p.m. on April 26, 2021. Memorial gifts in Edward’s name may be made to Ronald McDonald House, 569 4 St SW, Medicine Hat, AB T1A 4G2 or H.A.L.O. 12 – 49 Viscount Avenue SW, Medicine Hat, AB T1A 5G4. Condolences may be sent through www.saamis.com or to condolences@saamis.com subject heading Edward Herrmann. Funeral arrangements are entrusted to