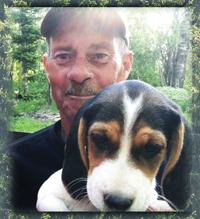 Bill Rosebrugh of Bow Island, Alberta, passed away unexpectedly on April 27th, 2021 at in the Calgary Foothills Hospital at the age of 64 years, loving father of Carson of Maple Creek, Saskatchewan.

He will be sadly missed by his siblings, Linda (Robert), Bob (Stephanie), Kathy, Vince and Sue (Jim); his former spouse, Sandra; and many nieces and nephews. Bill was predeceased by his parents, Ruth and Lloyd Rosebrugh of St. George, Ontario.

At an early age, Bill moved to Alberta where farming was the love of his life. He worked with Jack Bastiaansen prior to owning his own pig farm. He was employed by SMRID for 15 years, then Canadian Pacific Railway until his retirement. Over the years, Bill enjoyed helping his friend Theo (Regina) on their farm. His cabin at the lake, that he shared with Linda, was his favourite spot where he spent a lot of time fishing. A funeral service will be held at a later. Donations in Bill’s name may be made to a charity of your choice. Condolences may be made at www.gracememorial.com. Arrangements made by