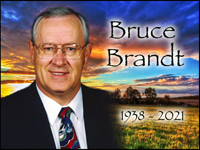 Bruce D. Brandt passed away on Friday, May 7 , 2021, at the age of 83 years after a short illness. He leaves to cherish his memory his wife of 54 years, Elaine; son, Dean Brandt and daughter, Holly (Matthew) Lomheim; sister, Betty Brandt; niece, Shelley (Mike) Merhi; great nephews, Merhi and Shadee; brother-in-law and sister-in-law, Dennis and Donna Holley; niece, Marni Holley; nephew, Mark Holley; his honourary grandchildren, Aaron and Jordan Weimer as well as numerous cousins in Canada and the United States. Bruce was predeceased by his mother, Dora Brandt and in-laws, Edward (Eda) Holley. He was born in Medicine Hat on January 14, 1938, and grew up in Irvine, AB. Bruce spent his early years playing baseball and curling and enjoying the company of his many close friends. After attending the University of Alberta, he started his teaching career in Bindloss, AB. While teaching junior high school students, Bruce met and then married fellow teacher, Elaine Holley on August 20, 1966, in Medicine Hat. His years in Bindloss were very happy ones and Bruce remained connected to the community and the friendships he made there long after he moved to Medicine Hat in 1967. That move started a new chapter in his life as he began teaching at Riverside School and then was promoted to Principal of Montreal Street School. During this time, Bruce completed his Education Diploma, Bachelor and Master degrees in Education at the University of Calgary. He later taught at Connaught School, served as Acting Assistant Superintendent for one year and finished his 38 year teaching career at Ross Glen School. Bruce was active in his service to his profession and really enjoyed socializing with his peers. He enjoyed teaching and interacting with the children, parents and volunteers at school. Bruce was fair and kind and liked nothing better than telling a good story or joke. During summer vacations, as well as in his retirement, he made time to volunteer for the Alberta Senior Games. Bruce loved playing golf and watching hockey with his good friends as well as spending time with the Weimer boys. He made friends easily due to his good nature and great sense of humour. Bruce spent many happy hours at the Veiner Centre visiting and laughing with his old and new friends. He will be deeply missed by all who knew him. A private family graveside service will be held at Hillside Cemetery with Life Celebrant Gerry Getz officiating. If friends so desire, memorial gifts in Bruce’s memory may be made to the Alberta Heart and Stroke Foundation, www.heartandstroke.ca; the Kidney Foundation of Canada, www.kidney.ca; or the Canadian Diabetes Association, Suite 220, 6223 – 2 Street S.E., Calgary, Alberta. T2H 1J5. (Condolences may be expressed by visiting our website at www.cooksouthland.com) Honoured to serve the family is

One Condolence for “BRUCE BRANDT”