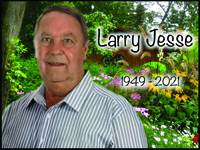 It is with an extremely heavy heart that Linda announces the passing of her beloved husband, Larry Herbert Jesse. He passed away at the Medicine Hat Regional Hospital on Saturday, May 8, 2021, at the age of 72 years. Larry was born on January 15, 1949, in Lampman, Saskatchewan to proud parents, Herbert and Alma Jesse. He grew up in Frobisher, SK., alongside his sisters, Leona, Shirley, Lorraine and little brother, Dennis. Life wasn’t always easy for Larry as his Mom passed away when he was only five years old. His sisters became his mother and took wonderful care of him. Larry met the love of his life, Linda when he was 18 and she was 15. They were anxious to start a life together and got married in 1969. Larry got a job in the Alberta oilfields and then moved to Calgary for a few years. They later settled in Medicine Hat where they established long, deep roots within the community and established the ‘Jesse Clan’ with their three children, Kent, Todd and Christy. Larry worked tirelessly to provide for his family. A hardworking and dedicated man, his family was never lacking food or a comfortable home to live in. Larry was an entrepreneurial spirit, incredibly creative and industrious as his career grew within the oil services sector. Larry had a successful career and rewarded it through with his family. In the early 1980’s, Larry purchased a lot at White Bear Lake in Saskatchewan and built a cabin for his family. He was especially proud of his large deck so they could hold large gatherings with family and friends. Always a cold beer, good conversation and lots of laughs were shared with family and friends. The Jesse family spent their summers and a few Christmas seasons at this treasured retreat, creating years of memories for his family. Chief of the BBQ can’t even describe Larry’s passion for the grill… his steaks were legendary! The secret was to buy a good meat, use a quality butcher and always… always blend your own spice and rubs. Larry was a Papa to his three pride and joys, his grandchildren, Brooke, Courtney and Katelin with whom he created memories with these girls that will last their lifetime. He loved woodworking with his girls and always had a smile and a hug for them. He taught them that popsicles are best served before breakfast at Papa’s house and he always had a mischievous grin on his face when the parents would try to scold him… Oh, how he loved his girls! Larry Herbert Jesse was the patriarch of the family. His love, generosity, dedication and most importantly the memories he created will live on forevermore through his family. As Larry battled against cancer, his largest fear was leaving his wife of 51 years alone. He can now rest in peace knowing Linda will be cared for by his family and that he is now reunited with his Mom and his family in the skies above. Along with his beloved wife, Linda Elaine Jesse (nee Fieber), Larry is survived by their three children, Kent Jesse, Todd Jesse and Christy (Jason) Wheeldon; three granddaughters, Brooke, Courtney and Katelin; sisters, Lorraine and Shirley as well as numerous nieces and nephews. He was predeceased by his father, Herbert; mother, Alma (nee Folkerts); brother, Dennis and his sister, Leona. Due to Covid-19 restrictions, a Private Family graveside service will be held at Hillside Cemetery on Tuesday, May 11, 2021, at 1:00 p.m. Those wishing to join the family virtually and experience Larry’s celebration are invited to watch via live-stream and may do so by visiting www.cooksouthland.com and selecting the View Broadcast button on the homepage at service time. A Celebration of Life and Memorial Tree Planting will follow at a later date as restrictions allow. (Condolences may be expressed by visiting www.cooksouthland.com) Memorial donations in Larry’s name may be made directly to the Canadian Cancer Society, 200 – 325 Manning Road N.E., Calgary, Alberta, T2E 2P5. Honoured to serve the family is