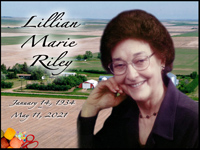 Charlene Smith, Norman Riley and daughter-in-law Cathy are sad to announce the passing of Lillian on Tuesday, May 11, 2021. Lil was born to Fred and Elizabeth Wutzke in Medicine Hat and grew up on the farm just east of the Haig School she attended. She spoke often and fondly of her youth and the hijinks she and her brother Alvin and their friends would get into. Lil married Charlie in October of 1954, and so began a lifelong love affair that ended upon Charlie’s death in February of 2018. She had missed him dearly ever since. Daughter Charlene in 1955 and son Norman in 1959, completed the family. Lil’s children were her pride and joy and they were lucky to grow up supported by her love and devotion. She would be very involved in their activities such as a 4-H leader for Charlene’s group and band booster club, etc. Lil worked side by side with Charlie on the farm and with Uncle Norman Stead who was really like a grandpa to them. She loved her life on the farm and the active and vibrant rural community of which they were a part. So many stories of fun with friends and at Conquerville community events! She was a long time member of the Conquerville W.I. until its dissolution. Lil was an accomplished quilter and seamstress and won the Alberta W.I. Best Seamstress provincial award for the creation of Charlene’s wedding dress. Lil was a great cook and worked hard to keep a big garden from which much preserving and pickling would be done. She kept making her dill pickles right up to last summer and they will be missed at the dinner tables. Her flower gardens were also lovely, and after her move to Bow Island in 2016, the condo board soon found out that yes, there would be flowerbeds under her windows! She was very much looking forward to spring things, but it was not to be. Lil and Charlie liked to take motoring trips and the most mentioned excursions were to P.E.I. in 1954 and 1988 to visit family, to California with Alex and Irene Onody, and trips to Nevada. While Charlie was a Lion, they attended many events in numerous locales. They also enjoyed a trip to Hawaii with George and Yvonne Schile. The 5 year Wutzke Reunions were always very special occasions for her. Travel weeks away seemed to come to an end with the arrival of Norman and Cathy’s children: Taryn in 1988 and Bradley and Raelyn in 1991. These three occupied a large part of Grandma’s heart. Now her attentions were turned to the grandchildren as she sewed beautiful dresses and outfits for them over the years. Lil and Charlie seemed happiest when they were attending the kids concerts, sporting events and dance and piano recitals. She stayed keenly interested in their lives as they grew into young adults and they basked in her love and concern for them. Lil will be greatly missed for her warm and welcoming smile, her stories and sense of humour, her generosity, her fierce political acuity and her keen interest in Norm’s work on the farm. Cathy will sorely miss dropping in for a visit. Also left to cherish Lil’s memory is her brother Alvin (Mary) Wutzke and his five boys and their families, Charlie’s step-brother Ernie (Doris) Jurkat and his two daughters, step-sister Marilyn (Ralph) Wilson, numerous P.E.I. relatives, many Wutzke relations, and her dear friend, Claire Fraser. Along with Charlie, Lil was predeceased by her parents, brother-in-law Russel Oginski, Uncle Norman Stead and son-in-law Jim Smith. A memorial service will be held at a later date. (Condolences may be expressed by visiting our website at www.cooksouthland.com). Memorial donations may be made directly to HALO, #12 – 49 Viscount Avenue S.W., Medicine Hat, AB, T1A 5G4. Honoured to serve the family is