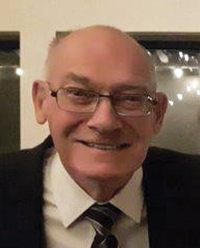 Ed Moore passed away peacefully on May 8, 2021 in Medicine Hat at the age of 87 years. Ed is survived by his son, Bernie (Gayle) Moore and family; his daughter, Brenda Moore; his sisters, Louise and Maria, as well as numerous nieces and nephews. Ed was predeceased by his parents, Jim and Ellen; his wife, Marie; and his bothers, David, Jim, Phil and Reg. Ed was born in St. John’s, Newfoundland on November 22, 1933. After high school, in 1951 Ed joined the Royal Canadian Air Force and for 29 years lived and worked in various locations in Canada and Europe. In 1960, while stationed in Red Deer, Ed met Marie, his future wife of 54 years, and they were wed on May 20th, 1961 and began the travelling life of a military family, living in St John’s, Halifax, Winnipeg, Germany, and Ottawa before finally returning to Red Deer in 1976. A few years after Ed retired from the Air Force in 1980, they made their final move to Medicine Hat, where Ed worked for the federal government at CFB Suffield until permanently retiring in 1994. Over the course of his military travels and life in Medicine Hat, Ed made many long- lasting friendships. In their retirement, Marie and Ed bought a motorhome and travelled to numerous locations, back to visit family in the Maritimes and to Arizona for several winters, reconnecting with family and friends from their military days as well as making many new ones. One of Ed’s favourite things was to have his grandchildren come to visit and to take them camping in the motorhome or golfing, resulting in many happy memories for all involved. Ed also was significantly involved in the National Association of Federal Retirees, being the local branch president for several years. A memorial service will be held at a later date. Condolences may be sent to condolences@saamis.com subject heading Edward Moore. Funeral arrangements by