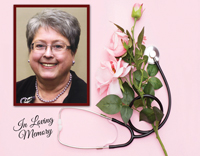 Marjorie (Watson) Berg of Medicine Hat, died peacefully June 6, 2021 at the age of 73 years. Born in Swift Current, Saskatchewan on October 29, 1947. Marjorie was the 2nd daughter to, Phyllis and Ernest Watson. She will be deeply missed by her son, Scott (Mandy) Berg, grandchildren, Aydria Berg, Nayla Berg, and Piercyn Berg; sister, Wendy (Bill) Wolcoski; brothers-in-law, Abe (Joy) Berg and Henry (Gail) Berg; sister-in-law, Dolly Berg; as well as many nieces, nephews and cousins. Marjorie was predeceased by her husband, Neil; parents, Ernest and Phyllis Watson; and sister, Lesley Berg. She lived as a child in Brandon, Manitoba and Eastend, Saskatchewan. Graduating high school in Eastend in 1965. She received a Bachelor of Science in Nursing degree from the University of Saskatchewan in 1970. Marjorie married Neil Berg on June 6, 1970, following her convocation. They began their married life in Calgary where Marjorie worked in the OR and School of Nursing at Calgary General until it was changed from hospital based to school based education at Mount Royal. Marjorie then worked for the V.O.N. in Calgary as a care nurse for a couple years until taking some time off before their son, Scott was born in 1975. In 1976, the Bergs moved to Shaunavon, Saskatchewan. Neil was in partnership with Marjorie’s dad in an electrical business and they settled into a busy family life. Marjorie worked in Public Health in Shaunavon for about 4 years. She then moved into home care for about 14 years to help develop the health care aide program for the Health District. Her last employment in Shaunavon was as a Senior Administrator with the Southwest Health District. The course of Marjorie’s life was forever changed when Neil passed away in 1997 after a brief struggle with cancer. In 1998, Marjorie moved to Medicine Hat to be closer to family. She soon began working at the Medicine Hat College, teaching the Health Care Aid program for about 6 years, retiring in 2007. During this time her son Scott moved to Medicine Hat and married. Marjorie very much enjoyed having him near and she was very proud of his accomplishments. As his family grew she loved spending time with her grandchildren, eagerly attending any events they participated in. Family was very important to Marjorie. She was very involved in the care of her parents in their senior years, and as she was considered the family ” medic” she was always there to help and give advice for anyone who asked. She was always eager to attend any family events, and also enjoyed keeping up with family and friends spending hours on the phone. Marjorie loved to travel. She went on several bus tours in the US and particularly loved her trips to Victoria BC. Two huge highlights were trips to Great Britain with her sister, Wendy and niece, Kelli in 2003, and the Indy 500 with Scott and Mandy in 2008. She was an avid news and TV watcher and kept very up to date with the current events. She also enjoyed watching many sports including golf, car racing, horse racing, equestrian, and tennis. Illness plagued her in her retirement years. She was forced to forego many of the things she wanted to do. As her health declined she moved through the system into various care homes as her needs required. She was always a great advocate for the nursing staff wherever she lived. Her most recent move was to Masterpiece where she resided until her passing. The events of the last year were very hard on her as she was unable to see or spend as much time with family and friends as she would have liked. She watched and enjoyed her last Indy 500 the Sunday before her passing. She died peacefully with Scott and her sister, Wendy by her side on Sunday June 6, which would have been her and Neil’s 51st wedding anniversary. Due to Covid-19 restrictions a funeral service will be held at a later date. In lieu of flowers memorial gifts in Marjorie’s name may be sent to Centre Street United Church, Box 1360 Shaunavon, SK S0N 2M0 or Medicine Hat Fire Department Burn Society, PO Box 1323 LCD 1 Medicine Hat, AB T1A 7N1. Condolences may be sent to condolences@saamis.com subject heading Marjorie Berg. Funeral arrangements by