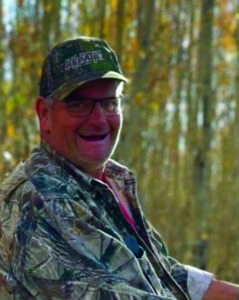 Taras William Melnyczuk passed away at the age of 54 years. Taras was born Nov 2, 1967 in Uranium City Sask. He was an only child to Wasyl (Bill) and Velma Melnyczuk. He grew up and went to school in Uranium City until the early 80’s when the Family moved to Eldorado Sask a short distance away. In such remote community Taras grew up loving the outdoors, fishing, hunting, sledding, and canoeing and anything Aviation. He would also hang out around the big trucks and the fire station shining up the fire trucks. For grades 11 and 12 Taras went to Notre Dame in Wilcox Sask home of the Hounds. In 1983 his father passed, and the mines closed so his mom and him moved to Medicine Hat AB. Once he graduated school in 1985 he got a taste of the oilfield working at Joyline Transport starting out swamping. Guys there became lifelong friends and mentors and got him into the driver’s seat. In later years he worked with Ronco Oilfield. In 1987 he met his girl Rhonoda (Schwabe) who later became his wife, but the north was calling him, and he moved to Slave Lake, AB. Once Rhonoda graduated she joined him. April 15, 1989, they married and welcomed their first child Megan in September 1989 In June of 1992 their son Wasyl was born. In 1996 he decided to go out on his own and Bush Baby Trucking came to be with his first truck moving rigs. In 1997 he bought his first Nodwell and rigged It up for fighting wildfires for forestry. 2007 he bought is first 6×6 floater truck a more specialized unit and rigged it up for wildfires. This is where his heart really was and followed up with another truck

in 2016. He was very proud of what he accomplished working in all areas of Alberta and did some work in BC and Sask. Working in these industries he has made lifelong friendships all over the world. Nothing made him happier then being called Gido (grandpa) with his grandchildren born Velma 2016 and Willium 2019. October 2021 is when he was first diagnosed with cancer in Medicine Hat Hospital. Through his illness he continued to be positive, brave, and strong until losing his battle March 31, 2022. Taras was predeceased by his father Wasyl and mother Velma. He is survived by his wife Rhonoda and their children Megan (Greg) and Wasyl (Raelene) and 2 grandchildren Velma and Willium.