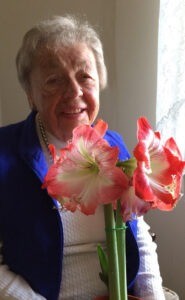 ERIKA ANNA FORNEFETT, of Lethbridge, beloved wife of Walter Otto Fornefett, passed away peacefully at St. Therese Villa, on Thursday, April 21, 2022 at the age of 93 years.

She was predeceased by parents, Ernest and Anna Mastag, and brother-in-law, Ludwig Stein.

Erika immigrated to Canada from Germany in 1952 at the age of 23 to start a new life with her beloved husband, Walter. After several weeks at sea, the ship docked in Quebec City and they made their way via train to Southern Alberta, where they planted roots and raised a family. They worked hard the first two years hoeing sugar beets in the Raymond area. Eventually, they moved to Lethbridge where they resided until Erika’s passing. Erika was a homemaker all her life but also enjoyed working part-time at Eaton’s restaurant for 20 years after her children were grown.

Erika had a wonderful life. She worked tirelessly to make a good home for her family, which she loved more than anything. Erika instilled strong family values in her children and reaped what she sowed. When grandchildren came along, this was a major life event for her, as she finally reached the milestone of becoming “Oma”. She wanted to spend as much time with them as possible and made sure they were loved in a way that only Oma can do. She spent many hours playing with them when they were young, making their favorite meals including “Oma cake”, and having them for sleepovers. The house was always filled with love and laughter when Oma was there. She reached another life milestone when she was blessed with her precious great grandchild, Thiago, whom she was able to meet and hold before her passing.

When Erika wasn’t busy with grandchildren, you could find her either in her lovely flower garden also known as “Fornefett Park”, playing beautiful music on her accordion, dancing the night away at the German Canadian Club with Walter, or enjoying “Kaffee und Kuchen” with family or friends. Erika touched so many people’s lives in a special and meaningful way. The world was a better place because of the wonderful, loving, and caring wife, mother, Oma, sister, aunt, friend, and role model that Erika was to so many people. Rest in Peace forever beautiful Erika. Until we meet again.

A Memorial Celebration of Life will be held at a later date to be announced. In memory of Erika Anna Fornefett, donations may be made to the Heart & Stroke Foundation (hsf.donorportal.ca)