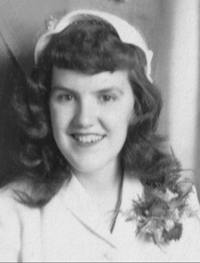 The family of Patricia Woods is saddened to announce the passing of their beloved mother and grandmother on May 10th, 2022 in Brooks, Alberta at the age of 87. Pat was born in Calgary on October 4th, 1934, to parents John George and Julia Poole. She spent much of her younger years split between Calgary and Blairmore, where she lived with her Grandparents. She never forgot Blairmore, and fondly recollected her time spent there and the mountains that forever held a special place in her heart. In July of 1954, Pat met Bill Woods of Sibbald, who was in Calgary attending SAIT, at a Stampede dance; they eloped a year later on July 12th, 1955. Bill moved his new bride to the family farm where they built a life and a family of their own together. They welcomed their first son George in 1957, followed by Jeff, Willaine, David, and Roger. Though Pat preferred to stay out of the field and corrals, she was persuaded to help sometimes, usually with mixed and oftentimes memorable results. Pat was a voracious reader and loved nothing more than a quiet place with a good book and a coffee, and she instilled in her family a love of reading and an appreciation for the little things in life, like the smell of coffee coaxing her out of bed in the morning, dandelions brightening up the yard, and the sound of the wind rustling through the trees. Her eyes would light up with love when a bouquet of pussywillows or crocuses were presented to her by her grandchildren, and every crayon drawing was proudly displayed on her kitchen wall as her own personal art gallery. A great listener, she always had a way of making you feel like you were the only person in the room. She always loved Calgary, so when Bill passed in 2004 she decided to go back. She moved from the quiet farm to downtown Calgary, a culture shock to some but not for Pat; she was right at home amongst the towering skyscrapers and skywalks of downtown. She was fiercely independent and strong-willed, and enjoyed the freedom city life afforded her. Her apartment granted her a view of the mountains, and she would proudly point out ‘her mountain’ to visitors. Pat never learned to drive, so when giving directions she used landmarks, such as cranes, which lead to some tense moments for whoever was doing the driving in Calgary, but Pat was never phased; she would say ‘every wrong turn is one turn closer to the right one’. As her mobility waned, Pat moved from Calgary to Medicine Hat Retirement Villa. In 2020 she lost her eyesight, and moved again to Agecare Sunrise Gardens in Brooks, where she could receive the additional assistance she needed. It’s difficult to sum up Pat’s life in a few paragraphs, and the impact she had on her family and friends; she was a wife, mom, Nanny/Grandma, friend, confidant, penpal, cheerleader, a light. The world is less now without her in it, but her light and love lives on in the hearts of those whom she leaves behind. Pat is predeceased by her loving husband Bill Woods, parents John George and Julia (Johnson) Poole, son Roger Woods, brother George Poole, grandson Graeme Woods, and grandparents Fred Albert and Sarah Johnson. She leaves behind her children George Woods (Cheryl), Jeff ( Maria) Woods, Willaine Rosenau, and David (Kim) Woods; grandchildren Vanessa (Adrian) Woods, Katie (Colin) McMillin, Ganya (Mike) Fyfe, Jessi (Shelby) Roseneau, Hayley Roseneau, Lindsay Woods, Layne (Olivia) Woods, Linden Woods, Cassandra and Branden Woods; great-grandchildren Owen and Sadie Liboiron; brothers-in-law Dick and Robin (Pat) Woods, as well as her numerous nieces and nephews. A Family Service will be held. Cremation is entrusted to and conducted at Smith Funeral Home Ltd. and Crematorium, Brooks