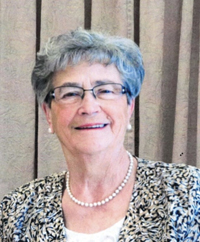 It’s with great heartache we announce the passing of our mom Noreen Fischer at The Foothills Medical Center on Thursday May 26, 2022 at the age of 81 years. Noreen was born on April 10, 1941 in Medicine Hat, Alberta to Jack and Doris Hatley. The family lived in Redcliff and Noreen attended school in Medicine Hat where she met her soul mate Elroy. They married in Medicine Hat on June 2 1962 and in 1965 welcomed their first son Brent. Elroy’s job with AGT moved them to Leduc for 10 years, where they had their second son Kevin. Noreen worked there as a secretary for Don Sparrow, a career she would foster and excel in for the years to come. They moved to Lethbridge for 4 years and finally to Olds where she lived for 43 years. Noreen worked at the Olds College as the Housing Officer until her retirement in 2006. She was quite active throughout her life. Swimming and playing baseball in the early years and later enjoyed golfing, gardening and flower arranging. In every stage of her life Noreen had an avid love of painting. Using oils for years and moving to water colours and acrylics. Many of her pictures hung with pride all over her home. Noreen was an active community member, whether it was with Helping Hands or Olds Hospital Volunteer Gardeners. She was also a busy member with the Zion Church in Didsbury. Noreen was a kind and giving person whose greatest joy and strength came from her children, grandchildren and great grandchildren. She is predeceased by her husband Elroy (2011) and her only sibling Marjorie (2021). She is survived by her sons Kevin (Maureen) and their daughter Sawyer; Brent (Rebecca) and their children Alea (Keith), Luke (Nikki), Noah, Kaitlynne, Malaki, Julianna, Zachary and 3 great grandchildren. The family extends their warmest gratitude to Dr. Eisner and The Foothills Hospital staff in units 32, 36 and 72 for all the care and compassion they have provided to our mom. In lieu of cards and flowers donations can be made to a charity of your choosing. Funeral services will be held at the Zion Evangelical Missionary Church in Didsbury on June 2, 2022 at 1:30pm.

One Condolence for “NOREEN FISCHER”