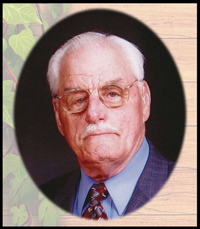 Ian was born in Bermersyde, SK on November 23, 1931. His family moved to Ashern, MB in 1931, where he grew up and went to school. The family relocated to Broadview, SK in 1949. He worked on the farm and in Regina in construction. From 1953-1956 he attended and graduated from the Full Gospel Bible Institute at Eston, SK. Ian entered pastoral ministry in 1956. He met Mary Ella Law in 1956 and they were married at North Portal, SK on November 20, 1958. They resided in Glenella, MB, Craigmyle, AB, Burdett, AB and Nanaimo, BC, where they ministered in churches until 1972.

Ian then worked in house construction for a few years and returned to Burdett to operate Burdett General Store from 1977 to 1989. Ian spent nine years in Calgary where he worked again in the construction industry, returning to Medicine Hat in 1998. Mary passed away in February 2000. Ian married Christel Dey in January 2003 and continued to reside in Medicine Hat.

The funeral service will be held on Tuesday, June 7th @ 1:00pm at First Assembly of God – 395 9 St SE, Medicine Hat with Pastor Ken Roset officiating. A private family interment will precede the funeral service at the Burdett Community Cemetery. Donations in Ian’s memory may be made to the Canadian Cancer Society by visiting www.cancer.ca or the Medicine Hat Food Bank – 440 Maple Ave SE, Medicine Hat, AB T1A 0L3. Condolences may be made at www.gracememorial.com. Arrangements are made by