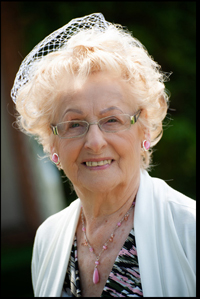 It is with great sadness that we announce the passing of Marion McKenzie after a short illness. Born to English immigrant parents John and Ethel Way in Indian Head, Saskatchewan and raised in Regina, Marion was one of eight children. She worked in Regina, Vancouver, and Calgary, where she met and married Wallace McKenzie. They lived in Medicine Hat, then moved to Ralston for seventeen years where they raised two sons and two daughters, and were active in several community groups. Marion was the manager of the local post office for several years. After moving back to Medicine Hat, Marion managed the Rehabilitation Society on 1st Street S.E. In 1971, she became the Unit District Manager of the Canadian Cancer Society where she stayed for the next 19 years. She was well-known for her kind and compassionate assistance among cancer patients and families throughout the city and district, and was an effective fundraiser through many local drives and events. In 1974, Marion remarried; to Reginald “Bud” McKenzie, and became active in the Royal Canadian Legion serving for many years with the executive. Marion and Bud travelled extensively over the years, including The U.K, U.S., Europe, Russia, and Japan. She was active in the Medicine Hat community as a clogger, doll maker and a founding member of the Horticultural Society among other groups. She had a special interest in water-colour painting and spent many years with the Strathcona Art Group. She exhibited annually at the Medicine Hat Stampede and maintained close relationships with several members of the group. Marion had a keen interest in genealogy, and also wrote several historical articles about events and activities in Saskatchewan that were well received by regional publications. Marion was predeceased by her parents in 1951 and 1957; husbands, Wallace in 1978, and Bud in 2004; sisters, Claire, Olive, Joan, and Shirley as well as brothers, Arthur and Albert. Marion is survived by her children Lauchlin, Kirk, Jolayne and Heather; step-children, Arnold and Sheila; sister, Dorothy “Chickie” Kenworthy from Maple Ridge, B.C. as well as a large extended family of grandchildren and great-grandchildren. A private family memorial will be held at a later date. (Condolences may be expressed by visiting our website at www.cooksouthland.com) Honoured to serve the family is