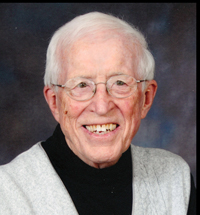 Mr. Francis Derek Ian West passed away at the Good Samaritan Southridge Village in Medicine Hat on Tuesday, June 14, 2022, at the age of 95 years. Derek is survived by his second wife, Mary Gallagher; five children: Raymond West, Maureen Remus (John), Catherine Buscholl (Frank), Nancy West and Joseph (Cindy) West; eight grandchildren: Fr. Derek, Joseph and Bernadette Remus; Catherine Cole (Steve) and Frank Buscholl Jr. (Natasha) and Rebecca, James and Olivia West; six great-grandchildren: Bently Cole, Ryland Cole, Bralyn Cole, Everly Cole, Kayson Buscholl and Elihanna Buscholl; three step-children: Dr. Mark Gallagher (Moira), Dr. Clare Gallagher and Paul Gallagher (Joy) as well as two step-grandchildren: Laura and Sheila Gallagher. He was very proud of them all and cherished the time they had together. Derek was born in Newcastle-Upon-Tyne, England and raised in Calgary. He was predeceased by his first wife, Rita Theresa (nee Blais) and married Mary Gallagher in 1995. He graduated with a B.Sc. in pharmacy in 1952 from the University of Alberta and moved to Medicine Hat in 1957. He was a member of the Kiwanis Golden K and Knights of Columbus. Derek loved music. He had perfect pitch and could play a song in his own style within 20 minutes of hearing it on the radio. He enjoyed golf, table tennis, slow pitch, curling, duplicate bridge, badminton and tennis even though he said most of the time he lost. His favourite team was the Calgary Stampeders. The Funeral Mass will be celebrated at St. Patrick’s Roman Catholic Church, 238 – 2 Avenue N.E., Medicine Hat, on Monday, June 20, 2022, at 11:00 a.m. with Reverend Father Derek Remus celebrant. (Condolences may be expressed by visiting our website at www.cooksouthland.com). If friends so desire, memorial tributes in Derek’s name may be made directly to Vincent de Paul Society c/o 238 – 2 Avenue N.E. Medicine Hat, Alberta, T1A 6A1 or to the Salvation Army (Family Support Centre), 737 – 8 Street S.E., Medicine Hat, Alberta, T1A 1M6. Honoured to serve the family is