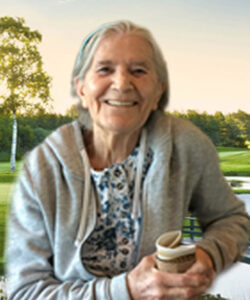 Audrey Christianson, beloved wife of the late Elvin ‘Bud’ Christianson, passed away at Masterpiece Southlands Meadows in Medicine Hat on Thursday, June 16, 2022, at the age of 82 years. Audrey will be lovingly remembered by her children from her first marriage, Robert Levesque and Denise Baron; grandchildren, Alan Levesque and Dayne Levesque-Spiry; step-children, Grant (Christine) Christianson, Sheryl (Chuck) Copeman, Cindy Christianson and Kenny (Rhonda) Christianson and their families; nine step-grandchildren as well as numerous great-grandchildren. Her memory will also be cherished by her brother, Gary (Nancy) and their two daughters, Veronica Atwood and Rebecca (Peter) Baba and their families; sister, Debbie (Maurice) Romaine and family; brother-in-law, Jim Gaetz and his children, Jim (Glenda) Gaetz Jr., Heather Gaetz, Tom (Ingrid) Gaetz and John (Michelle) Gaetz and their families. She was predeceased by her husband, Bud Christianson; father, Alfred Reynolds; mother, Ina Reynolds; sister, Myrna Gaetz as well as her brother, David Reynolds. Audrey was born and raised in Beatty, SK., and attended school in Melfort, SK. Her first marriage was to Sylvio Levesque and her second marriage was to Elvin ‘Bud’ Christianson on December 31, 1988. Audrey started working as a nurses aide at a very young age and worked in this profession in both Saskatchewan and BC, before finishing her working career in Medicine Hat. Audrey was a very caring person and was said to be very fun to work with. She liked to play cards, dance, watch game shows and especially like to spend time with her grandchildren, attending their games and cheering them on in whatever they did. Audrey’s favourite times were times spent with family. In honour of Audrey’s life, a Graveside Service will be held at the Hillside Cemetery Columbariums on Saturday, June 25, 2022, at 11:00 a.m. with Murray Jaster officiating. Those wishing to attend are encouraged to meet at Cook Southland Funeral Chapel between 10:30 a.m. and 10:45 a.m. The funeral procession will depart at 10:50 a.m. A time of fellowship and refreshmenrts will be held at the Medicine Hat Lodge Banquet Room, 1051 Ross Glen Drive S.E., Medicine Hat following the Graveside Service. (Condolences may be expressed by visiting our website at www.cooksouthland.com) Memorial donations in Audrey’s name may be made dirctley to CNIB, 10 – 11A Street N.E., Calgary, Alberta, T2E 4Z3. Honoured to serve the family is