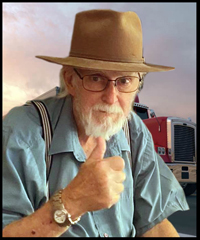 Garry Patrick Godfrey hit the road for the long haul on his birthday June 27 at 76 years young. You can do the math. Hopefully it’s not too far of a trip as his drivers license expired that day. He is joining his so dearly beloved Sherri, who has been waiting far too long, 17 years. Waving bye for now are his four sons: Michael, Kelly, Sean (Jacquie) and Benjamin, who will now have to find their own ride home. Also remembering Garry are his granddaughters Jaden and Sage; the Saskatoon crew, Maureen, Stan, Loris, Tim, Luke and Zach; the Get Along Gang in Melville, Brent, Deanna, Chris and Megan as well as his brothers, Ross and Jack (Leah); nephews, James and Andrew, brother-in-law, Albert; nephews, Christopher, Ryan and Wayne and many numerous friends, acquaintances and fellow travellers. Garry’s mom and dad, Vivian and John as well as his sister, Joan journeyed ahead of him. Garry was an avid motor sports fan; anything on wheels… in fact there’s still a motorcycle in the basement he forgot about. A very hardworking man, Garry lived always with humour and was generous to a fault. A Celebration of Garry’s life will be held at Cook Southland Funeral Chapel, 901 – 13 Street S.W., Medicine Hat on Sunday, July 3, 2022, at 1:00 p.m. In lieu of flowers, the family asks that you do something nice for somebody else unexpectedly and without explanation. (Condolences may be expressed by visiting our website at www.cooksouthland.com) Honoured to serve the family is