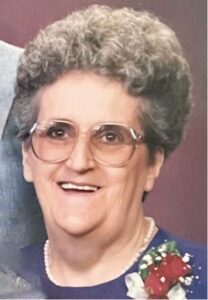 It is with great sadness we announce the peaceful passing of Dorothy Jean Voth, late of Weyburn, SK on June 30, 2022 at the age of 88 years.

Dorothy was born January 1, 1934 to Bob and Alice Beyer on the homestead by Vidora, SK. They moved to Herbert, SK in 1941 where she went to school and later met the love of her life, Victor Voth. They married on October 13, 1952. They had three children, Wayne, Sandra and Donna. They moved to Shaunavon, SK in 1970 and Dorothy went to work at McGregor’s Variety Store and later at Binkley’s Pharmacy. Dorothy enjoyed working in the retail business where her day was spent working with the public. She enjoyed gardening, travelling and spent many hours crafting, many of which she sold at Binkley’s. Her biggest joy was when she heard her kids and grandkids were coming for a visit. She would fill her freezer with homemade cinnamon buns in anticipation. Following her stroke in 2006, Dorothy moved to Weyburn to be closer to family care and spent 12 years quite independently before moving to the nursing home in 2018.

For family and friends so wishing, charitable donations in memory of Dorothy may be made to a charity of your choice.

Arrangements are entrusted to RD Family Funeral Chapel & Crematorium, Weyburn, SK (848-0333 ~ 1-888-848-0333). Expressions of sympathy to the family may be sent to our website at “http://www.rdfamilymemorialchapel.com/” www.rdfuneralchapel.com “Honouring Life and Celebrating Memories.”