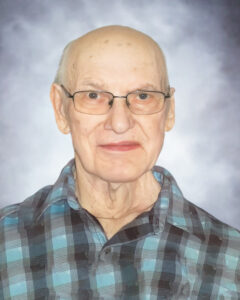 Lawrence (Larry) Stephen Bakanec passed away on Friday, July 1st at the age of 86. Beloved husband of Irene Bakanec of Maple Creek and loving father of Kelly, Kathy, Karen, Kereen, Keith and Kurtis.

Larry was born and raised in Fox Valley, SK March 8, 1936. He loved animals and motorbikes, and, in 1959, met the love of his life—Irene Hirsch. In 1960, Larry and Irene got married and together farmed and raised their family on the Bakanec homestead. Larry worked hard to support his family & did his best to instill his work ethic & faith into each of them. He worked hard all week long but Sundays always meant a trip to church & a day of rest. He was also a very honest, generous man and donated to numerous charities.

Hobbies and interests at various points in his life were hunting, target shooting and fishing. He was skilled at all of them. His enjoyment of fishing lasted for many years and included numerous fishing trips with family and friends. Larry was a practical joker and many family and friends of all ages were on the receiving end of his humourous antics.

Larry was an exceptional machinist & mechanic. He invented and built many items that made life easier and more enjoyable not only for himself but also for other farmers and the Fox Valley Community. He spent hours and hours in his shop helping out neighbours & making sure their equipment was ready to go even before his own.

Larry & Irene retired to Maple Creek in 2002 but he continued to help Kelly on the farm whenever he got the chance. His last harvest was in 2016 at the age of 80—he ran the combine.

Prayers will be held Thursday, July 7th at 7:00 pm in St. Mary’s Roman Catholic Church, Fox Valley, SK. Wine & cheese to follow. Funeral Mass will be celebrated Friday, July 8th at 11:00 am in St. Marys Roman Catholic Church. Interment to follow at Fox Valley Cemetery. Everyone is welcome. Guests are also invited to join the family for lunch in the church basement following Interment.

Arrangements are by Binkley’s Funeral Service in Maple Creek. Condolences may be offered to the family at www.binkleysfuneralservice.com. Those who wish to remember Larry with donations may do so by donating to a charity of their choice.