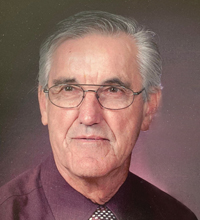 Jake Dockter passed away peacefully at home on July 13, 2022 at the age of 87 years. His passing leaves a hole in our hearts. Jake will be lovingly remembered by Elaine his wife of 58 years, his son Darren, his daughter Ila (Gene) and his grandchildren Brenna, Abra (Michael), Jared, and Mae. Jake is also survived by his sister Edna (Laurie); his brother and sister in-laws Gordon (Arlie), Jim (Jackie) and Dorothy (Norm); nieces and nephews. Jake was predeceased by his parents Christian and Katherina; his sisters Eva and Frieda and infant brother John, and infant granddaughter Nadine.

Dad said, “I have had a good life, and many jobs and cars.” A highlight in his retirement years was spending 27 winters in Arizona. Jake enjoyed spending time with friends and family, playing pool, fishing, camping and tackling just about any kind of project. Jake was an innovator, creator and thinker. He will also be remembered for his kindness and generous spirit. Jake’s life touched so many people.

The family of Jake would like to thank Olds Home Care and our palliative care givers Deana, Debbie, and Dr. Wielenga for the warm and exceptional care they gave.

The family will be celebrating Jake’s life on August 2nd, or as Dad called it, “his party”. Donations may be made to STARS Air Ambulance in Jake’s memory.