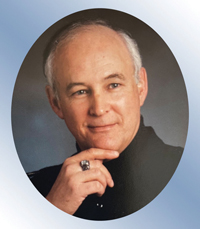 It is with great sadness that we, his family, announce the passing of Brian, at the age of 72 years. He passed away peacefully July 25th, 2022, with family by his side.

Brian was born and raised in Vancouver, the only child of Bud & Margaret. Following his high school graduation, Brian went on and received his BA in History and then joined the Canadian military where his 35-year career as a police officer began and finally finished in 2000 when he retired from the Medicine Hat Police Service.

During his service with MHPS he was partnered with a fellow police officer, Mark Fenterman, and this led to a lifelong friendship even after Brian retired. Brian cherished his friendship and time spent with Mark during these years whether it be their pizza and movie nights or just catching up over coffee and for this we thank you, Mark.

Following retirement, Brian loved to read and watch movies especially anything to do with military history. He also spent many an hour on his computer.

As per Brian’s final request, no formal funeral service will be held.

He will be remembered quietly by his family and friends.

We, his family, would also like to extend our heartfelt thanks to all the staff at AgeCare Riverview LTC who cared for Brian during the last few months of his life.

Arrangements are made by