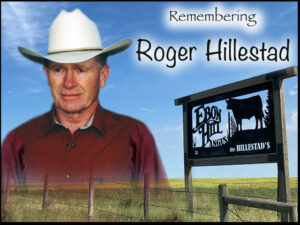 Roger Carl Hillestad, loving husband, father, grandfather, brother, friend and cattleman passed peacefully on Sunday, July 31st, 2022, surrounded by his devoted family. Roger was born during harvest, on August 15, 1944, to Carl and Ethel and was welcomed by sister, Beverly. From this day forward it was a given that Roger’s birthdays would be celebrated in the field, with the combine running in the background. Roger’s passion for farming was apparent from an early age. As a child he spent his days sketching animals and nature, building model barns and corrals, snaring gophers and learning the ways of farm life.

After completing high school, Roger received his bachelor’s degree in Education in 1968 from the University of Calgary. He taught school in Medicine Hat before returning to farm full-time in partnership with his parents. Roger was a progressive, forward-thinking farmer, introducing fertilizer, no-till seeding, continuous cropping, chem-fallow and straight-cut combining to the operation. His work ethic and attention to detail were evident in all he did. Farming was an integral aspect of Roger’s life but it was the registered Black Angus cattle herd that brought him the most joy and satisfaction.

On June 4th, 1974, Roger married the love of his life, Jo Ann Smythe and they were blessed with two daughters, Cara and Lana. Roger loved nicknames and he fondly referred to “his girls” as Joey, CJ and Leonard. He was no longer outnumbered when James and Lance joined the family. Together they enjoyed many cold beers, told many tall tales and shared many laughs. As the family grew, he loved to be “Papa Rogie” to his four grandchildren: Aivree, Addison, Kinley and Hoyt, whom he adored. His family was his greatest joy and he treasured the time spent with them whether working together on the farm, on vacation at the cabin or enjoying an occasional round of golf. He took pride in knowing that his children and grandchildren have roots in the cattle industry and maintain the strong values and love of the land that they were raised on.

Roger was an astute breeder of Black Angus cattle and along with his family, continued to grow Ebon Hill Angus. He was honored to be recognized by the Alberta Angus Association as Purebred Breeder of the Year on two occasions, as well as the distinction of being named one of the Alberta Angus Association’s Hall of Fame Breed Builders in 2013. Ebon Hill also received recognition from the Canadian Angus Association as a 50 Year Member in 2013. Roger valued the life-long friendships that were developed through his commitment to the Angus breed.

The simplest pleasures in life brought great joy to Roger. He had an amazing sense of humor and those who knew him well can recall his numerous “Rogerisms”… right guy?! He loved pouring a stiff drink for friends and family at the end of a hard day’s work whether it be at home on the farm or in a cattle barn after a show or sale. He would often sit on the tack box and express to his family, his respect and admiration for fellow cattle breeders. Roger created many cherished memories and friendships through his love of hunting and the outdoors. Whether it was with one of his buddies, Jim or Don, or with daughter Cara, Roger loved to hunt! After taking up archery, it was bowhunting that he enjoyed most. He was a member of the Bow Island Ducks Unlimited committee, where he volunteered for over 20 years, raising awareness for the wetlands and environment. In his younger years, he had a keen interest in cars and racing and it continued later in life as you could often find him watching drag racing in his free time. Roger was known for his sweet tooth and would never pass up any dessert, often asking “What’s for ‘D’ Joey?”. His all-time favorites were Ethel’s famous apple pie and Lana’s date square.

A Celebration of Life will be held in the spring after the 2023 calf crop hits the ground.

Roger’s family wishes to extend their deepest appreciation for the amazing staff at Sunnyview Care Centre. They found comfort knowing that he was loved and respected while in their care. In lieu of flowers, donations can be made to Sunnyview Care Centre, Alzheimer’s Society of Alberta and NWT and the Margery E. Yuill Cancer Centre. (Condolences may be expressed by visiting www.cooksouthland.com) Honoured to serve the family is

One Condolence for “ROGER HILLESTAD”