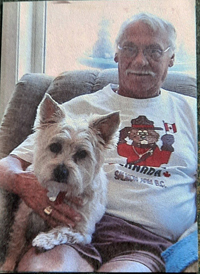 It is with great sadness the family of Ernest Wayne Hehr mourns his passing.

Wayne was born in Medicine Hat, AB to Clarence Ernest and Ruby Lela Hehr. He spent his childhood and teen years between medicine hat and his grandparents farm in Bowell, AB.

Wayne started his career in Brooks and from there he continued working in the oilfield industry in Europe returning to finish out his career in Alberta after 30 plus years.

In May 2005, Wayne retired and moved to Sorrento, BC to live ‘his dream’. Wayne and Cheryl enjoyed many hours boating, fishing and exploring the lakes… not much went unexplored!! They were usually accompanied by their dogs! After nine years in Sorrento, Wayne and Cheryl moved to Salmon Arm where they lived until Wayne’s passing. Wayne and his dog Rikki took many scooter rides around Salmon Arm. Wayne LOVED his dogs!!

Wayne and predeceased by his father Ernie in 1972, his mother Lela in 1997, and his youngest brother Glenn in 2004. He is survived by his wife Cheryl, brother Weldon (Iris) Hehr, sister Narda Sikal, numerous nieces and nephews and special friends Jacqueline Hehr, Darrel and Helen Snortland.

Service will be held in Salmon Arm, BC

Donations may be made in honor of Wayne Hehr directory to Shuswap Lake Hospital or to a charity of one’s choice.

One Condolence for “ERNEST WAYNE HEHR”